Police officers from Kirinyaga are currently investigating an incident that happened today in the evening after a man allegedly killed his 3 year daughter.

In a news report that has been shared by a reliable source of information, it has been revealed that the suspect allegedly took his daughter on a father daughter lunch date before he allegedly decided to poison his daughter's food.

Additionally, it has been revealed that the suspect allegedly took his own life moments after his daughter died. According to the reports given by the police officers who are currently investigating this incident, they claimed that they are yet to find the man's motive behind this.

This is happening at the same time when the government through the inspector General of police, Hillary Mutyambai has called upon kenyans to make sure they look into their poor mental health in order to reduce the increasing cases of suicide and murder statistics in the country.

While reacting to this incident, kenyans who took to their different social media accounts to express their opinions and suggestions on the matter have called upon the government to consider looking into the already increasing cases of poor mental health among kenyans.

According to the reports given by most Kenyans, they claimed that it was so unfortunate that the government is yet to do something about the increasing number of kenyans who are currently taking their own lives despite the fact that the numbers are currently rising on a daily basis. 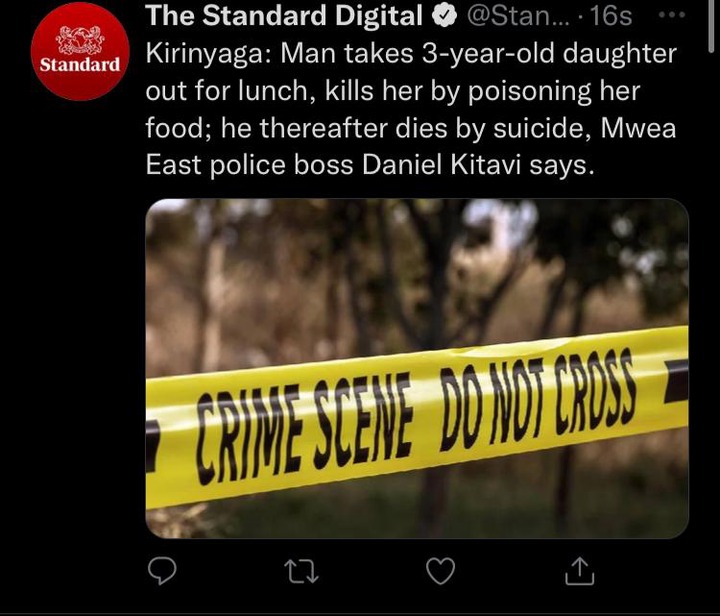 'We Are Soon Getting Rid Of The Yellow Fever In Mount Kenya' Murathe Declares Raila's Victory.