By Elevate123 | self meida writer
Published 8 days ago - 0 views

The family of 60 year old Geoffrey Gitere, a popular business man from Meru have expressed their opinions and suggestions concerning the disappearance of the man who is reported to have gone dissappeared on his way to the land commission offices.

According to the reports given by the nation media group, it has been reported that the victim dissappeared back in 2016 where the police officers who were conducting an investigation on his disappearance stopped the search until one of the family members gave them another tip.

Reports received from the family member who sought anonymity, he claimed that he was walking by before he heard the wife of the victim speaking to one of her friends who asked her if she was going to kill and bury her the way she had killed and buried her missing husband.

This was followed by a dramatic scene after police officers launched another investigation where they started digging several locations within the homestead looking for the possible burial site after the latest Confession from the man.

However, the DCIO who was InCharge of this investigation revealed that the man's search has not come to an end where they claimed that their excavation were not giving out any possible evidence adding that maybe he was buried elsewhere. 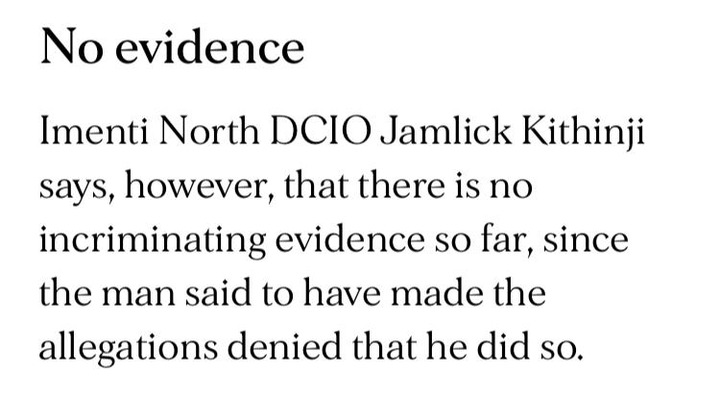 In another statement, the son of the republic of missing business man claimed that it was like his step mother was using Witchcraft especially after an incident where the escavator is reported to have stopped working moments after she leant on it and in his own words, pretended to be crying.

Due to this reason, he has called upon the agents from the director of criminal investigations to look into this matter because he believes that his missing father might be closer than they all think. 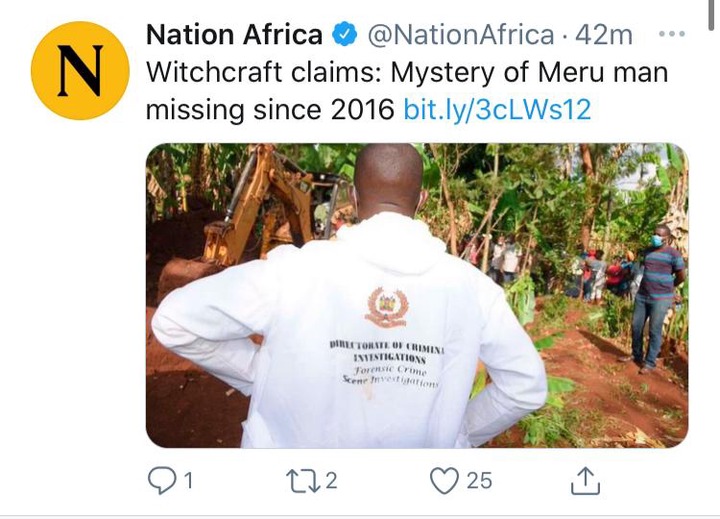 DCIO Geoffrey Gitere Meru
Opera News is a free to use platform and the views and opinions expressed herein are solely those of the author and do not represent, reflect or express the views of Opera News. Any/all written content and images displayed are provided by the blogger/author, appear herein as submitted by the blogger/author and are unedited by Opera News. Opera News does not consent to nor does it condone the posting of any content that violates the rights (including the copyrights) of any third party, nor content that may malign, inter alia, any religion, ethnic group, organization, gender, company, or individual. Opera News furthermore does not condone the use of our platform for the purposes encouraging/endorsing hate speech, violation of human rights and/or utterances of a defamatory nature. If the content contained herein violates any of your rights, including those of copyright, and/or violates any the above mentioned factors, you are requested to immediately notify us using via the following email address operanews-external(at)opera.com and/or report the article using the available reporting functionality built into our Platform

Slain KBC Journalist To Be Buried Tomorrow As Investigations Continue 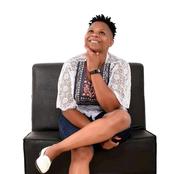 Cristiano Ronaldo Trains With His Girlfriend Georgina Rodriguez In The Gym 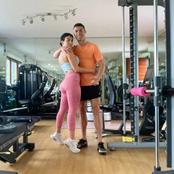 "My Mum Has Refused to be Vaccinated," Furious Mp Rants 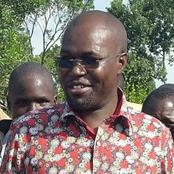 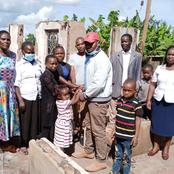 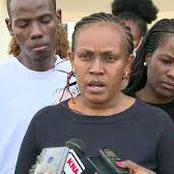 How Movies are Used to Promote Devil Worshiping 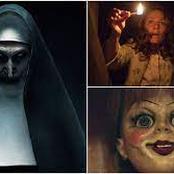 Why Prince Phillip Was Never Given The Title King 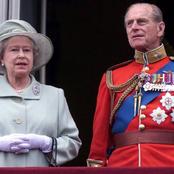 The Only Person Who Was Allowed to Call Queen Elizabeth By Her Name is African, Here's Who and Why 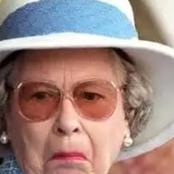 Opinion: Judging From The Message Between Harmonize And Paula, Did Both Of Them Fail Kajala's Trust? 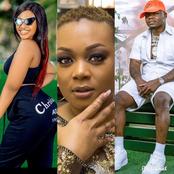 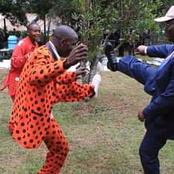