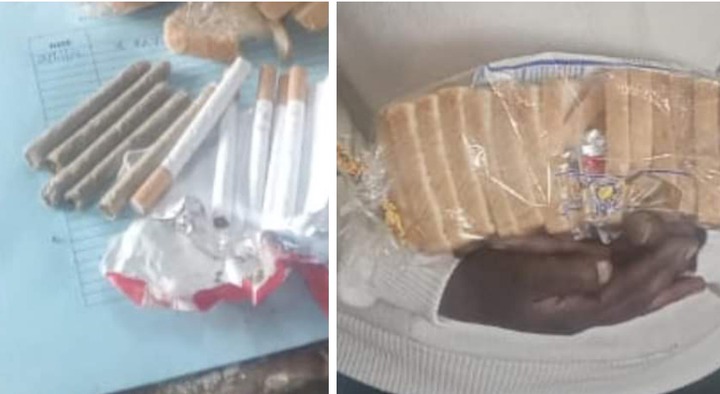 A woman who attempted to sneak bhang to a suspect in police custody at Gilgil police station found herself in an unfamiliar territory, after her well scripted plan was nipped in the bud by hawk-eyed officers manning the station’s report office.

The daring 30-year-old Caroline Imenza, had walked into Gilgil Police station minutes past 6am and requested to see her husband one Stephen Nyabuto, who was a guest of the state at the facility.

The soft spoken Imenza who cut a figure of a good wife and her actions appeared to be beyond reproach, had carried a loaf of bread and a flask full of hot tea, to be handed over to her husband for breakfast.

But the female officer who was on guard at the report office desk wasn’t persuaded by the woman’s demeanor. She uncovered the loaf of bread and found a steep gorge that is characteristic of today’s loaves of bread, but towards the end she uncovered 5 rolls of bhang, five cigarettes and a matchbox.

Immediately, the officer detained Imenza and led her to a secluded room meant for gender related cases, where she conducted a detailed body search on the suspect. Her efforts were rewarded when she uncovered a further 80 rolls of the herb, carefully concealed in the suspect’s undergarments!

Efforts by the suspect to bribe the officers with Sh2,000 to secure her freedom were not only met with resistance but an additional charge.

As we commend the actions of the police officer on duty and her counterparts, the suspect is currently being held at Gilgil Police station pending arraignment tomorrow morning.

Content created and supplied by: Updates254 (via Opera News )