By RogersGichana (self media writer) | 10 days ago 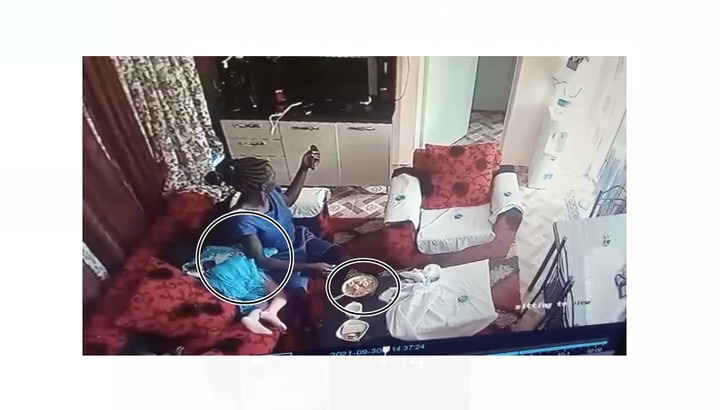 Screen shot from a CCTV footage showing how the lady sat on the Kids head while enjoying her food.

A family in Kisii has been shocked after reviewing a house CCTV footage. Tired Momanyi Janai and His wife Mercy arrived home after a long day at work only to be welcomed by unusual faces from their young daughter.

Suspicious Janai could not exactly comprehend what her terrified shivering daughter was explaining to him. Standing right at the sitting room, Momanyi could neither get any response from the Teso lady who has been taking care of their infant and the young daughter for two months now.

At this time Mercy his wife had already landed on CCTV. Joined by Momanyi, they were welcomed with terrifying footages. Scholastica Toto the house help as they call her was sitting on their daughter's head as she proudly swallows lunch she had prepared for the kids.

Momanyi restlessly explains to this writer how this prompted him to send the lady to her maker. Luckily he is a servant and preacher of the word, forgive rung his head.

At this Point, Mercy his wife had already broken to tears. They continued, the second clip was witnessing how their ailing infant was being brutally dressed.

Pulling a knife was not enough but a regretting action that could have been made out of anger.

"I just felt like killing her using a kitchen knife. I took a deep breath and called my close friend who calmed my boiling temper and advised me to lock her in custody. With the help of neighbors, we took her to Kisii Central Police station where she was locked," Narrated Momanyi.

After a long meditation being a renowned pastor, Janai and his wife made a bold move to forgive and handed her to her parents yesterday Monday.

"After careful meditation, we just decided to forgive. We told the police to release her. We made sure she had safely landed in her parents' hands. We have never wronged her. I can't understand why she chose to mistreat my kids in such an inhuman manner," Said Mercy.

Lucky Dubes's Daughter Is In Nairobi

"He Invited me to His House at Night, Forced me to Undress & Later Chased me Out "- Campus Girl Says