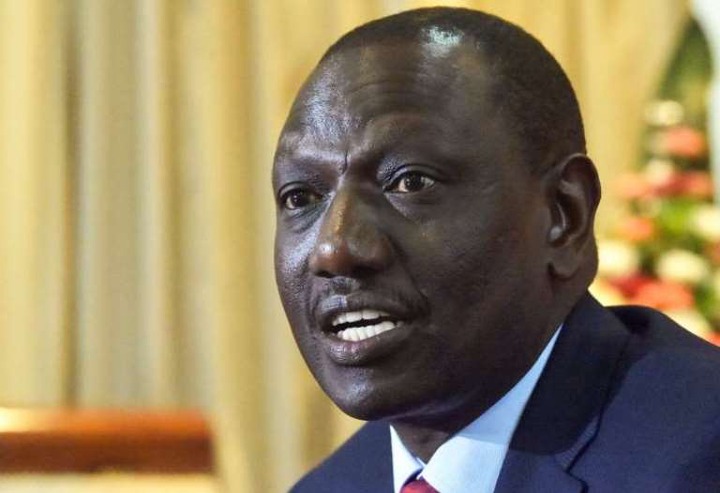 Digital Strategist Dennis Itumbi has come out to reveal details after controversy emerged over a bus donated by Deputy President William Ruto.

Kenyans were however quick to note some details when Itumbi revealed a letter by Isuzu East Africa trying to explain why the bus was allegedly repossessed.

The letter by Isuzu dismissed claims of a different letter that was circulating that it had reposed the bus that was donated to a school in Tigania West in Meru County.

Kenyans were however quick to note that in the letter shared by Itumbi, Isuzu claimed that Kianjai Girls Secondary School from Tigania had placed the order for the bus and not DP Ruto.

Kenyans questioned why there have been claims that it was Ruto who donated the bus to the school yet according to Isuzu, the schools made payment for the bus.

“But the bus was bought by the school in December 2020 according to Isuzu not a donation by DP. So it was just a PR exercise,” said Clinton Mayega.

“The bus in question donated to Kianjai was a 62 seater the logbook you've posted is for a 46 seater,” said Kevin Munyui.

“This looks Reactionary. What if the issue hadn't been raised? Would the bus still have been delivered?” said Guru Mwafriqa. 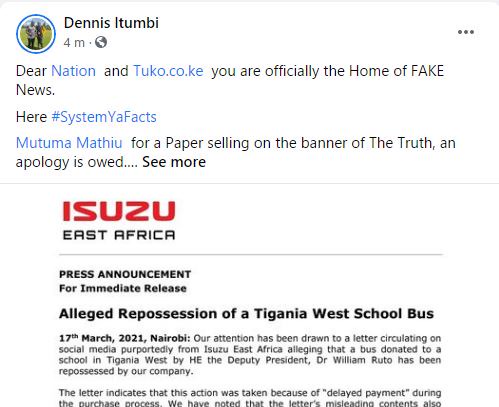 “Wait si ulisema this bus was a donation from the DP, mbona Isuzu wanasema the school placed an order in 2019? Who’s telling us what? We need to know the truth, nothing but the truth here buana,” said Paul Akango.

“So Ruto was presenting a school bus to the school that bought the same bus. What was Ruto donating?” said John Nyamweya.

“Question is, why couldn’t he wait to hand over the bus once all processes were completed? The bus was registered yesterday, so the bus that went to Meru was unregistered? Find something else to spin?” said Ken Ambula. 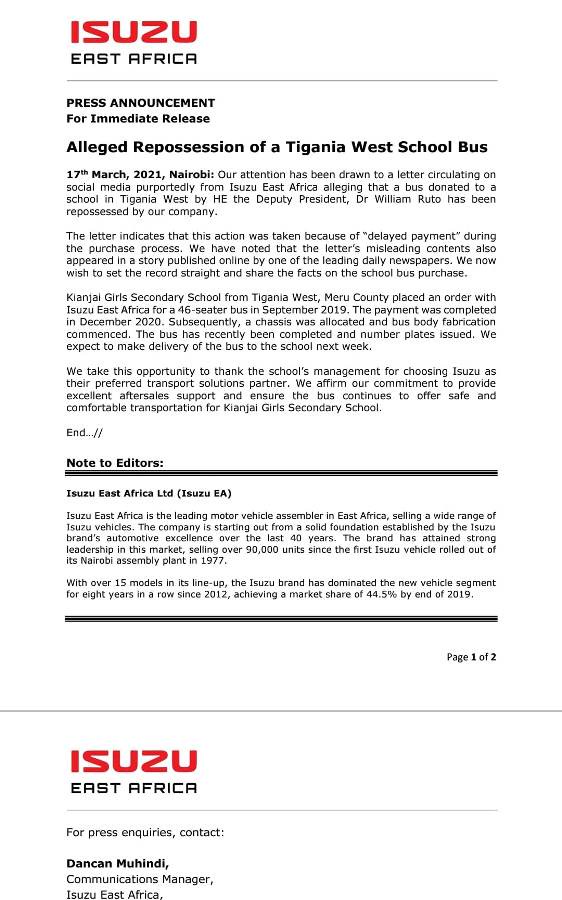 At least 3 Dead, One Seriously Injured in Grisly Road Accident Involving Tuktuk and Lorry in Kwale

Just In: Gsu Forced To Use Water Cannons To Chase Away Motorist at Bluepost Roadblock (Video)

Who is To Blame For The Students Who Spent The Night At Uhuru Park?