By Crazygenie (self media writer) | 1 month ago

Isiolo police are now looking for a group of accused bandits who ambushed locals in one of the area's villages. The suspects allegedly ambushed one of the villages, following which they allegedly opened fire in an attempt to rob the people, according to information provided by a credible source.

A violent situation then allegedly ensued as many police officers who were present at the crime site allegedly responded by opening fire and shot at the retaliating suspects.

In response to this concern, police investigators for this event have disclosed that they are presently looking for the suspects who are alleged to have managed to flee the site of the shooting. Sadly, it has come to light that the defendants are accused of killing six persons, including two police officers. It has also been made known that a number of additional people were taken by ambulance to the hospital, where they are currently receiving medical care. 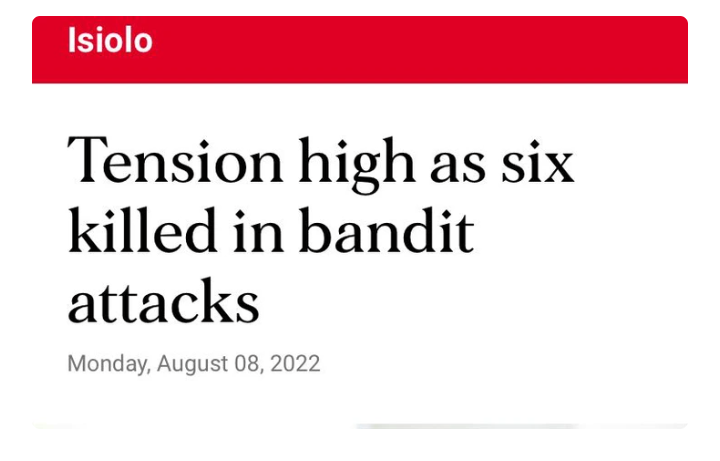 This is taking place at the same time as the government, as represented by Interior Cabinet Secretary Dr. Fred Matiangi, has asserted that it is prepared to defend all Kenyans from any violence that may arise during the next General Elections. Kenyans who responded to this occurrence by using their various social media accounts to share their thoughts and recommendations have extended their sincere sympathies to the family and friends of the deceased citizens who were slain in the tragic gunfire.

Nairobi, 18-Year-Old Lady Seeking For Justice After She Was Allegedly Sexually Assaulted By 3 Men

Reactions After This Photo Of Vera Sidika Circulated Online

What Next After Avengers endgame? Marvel Fans Got the answers