By Kingsmannews (self media writer) | 1 year ago

The three were charged together with Sylvester David Masiaga (Ms. Nyamohanga's nephew) and Peter Ngere Githu, who all denied the charges of obtaining the Sh 48,540,000 fraudulently from the unsuspecting members of the public who were promised jobs in government agencies.

The five were alleged to conduct the act by pretending falsely of being in a position to secure employment for the victims at various high-rank organizations. The organizations included the Kenya Airports Authority(KAA), the National Police Service, the National Lands Commission and the Kenya National Highways Authority, the Anti-counterfeit Agency, Ken Gen, and the Nairobi Metropolitan Services. 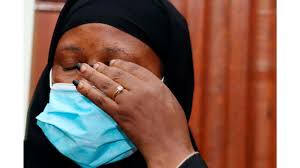 The evidence revealed that over Sh 22 million was held in Mr. Manyara's account, while over Sh 15 million in Mr. Masiaga's.

Defensively, lawyers Jason Orina and Victor Olao applied for bail for the accused, for whom the prosecution did not reject the application. The defense lawyers called on the court not to be swayed by the amounts appearing on the charge sheet.

Mr. Orina further noted that the prison officers had abodes that were fixed and therefore severe bail terms would amount to infringement of their constitutional right.

One of the victims was a mother from Kiambu County who was tricked by Ksh 800,000 by the five suspects on a promise that her three children would be offered job opportunities at the National Health Insurance Fund (NHIF), the Kenya Ports Authority, and Nairobi Metropolitan Services.

It was reported that she was offered appointment letters inviting her children to the various institutions that announced vacant positions, allegedly. However, she was edgy on the originality of the appointments when the suspects called twice to postpone the reporting dates, quoting health restrictions.

This gave her doubts about the job opportunity, thus prompting her to report to the detectives.

The economic crisis, in general, has led to many people losing their jobs. This has opened new doors for con artists and corrupt individuals into misleading unsuspecting victims for a brighter future during the hard economic times.

Content created and supplied by: Kingsmannews (via Opera News )