Residents of Juja in Murang'a county can now sigh relief after three notorious kidnappers in the region who had proven to be a menace in recent days were finally cornered by highly trained police detectives.

The three are currently cooling their heels at the Juja police station as they await to be arraigned in court to answer to charges and Juja DCIO Richard Mwaura confirmed that they are still tracing two other victims who had been thrown out of a moving vehicle by the same kidnappers. 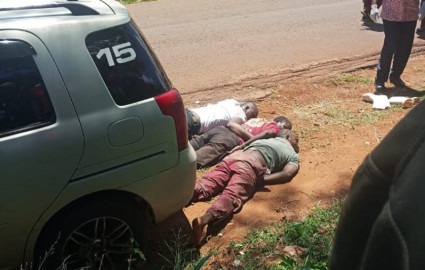 "The suspects had already started asking for ransom and when we questioned the lady who was in captivity, she told us that there were two men who were bleeding in the car and they were thrown out of the speeding suspects’ vehicle,” he said.

The three had kidnapped a woman who was en-route to Nairobi at around 8 am and sped off towards Thika town and the detectives acted following an alarm being sounded of the presence of kidnappers in town.

The police recovered six mobile phones from the suspects and a blood-stained kitchen knife while the 35-year-old woman is currently recuperating at a nearby hospital.