Outrage As This Heartbreaking News Is Reported In Busia 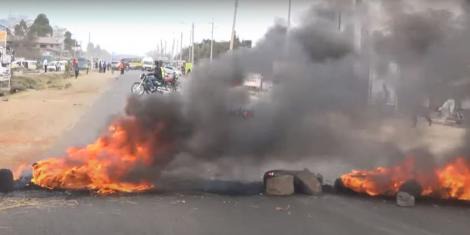 Irate Residents of Malaba in Busia County have stormed the streets of Malabar town after a rogue police officer shot and killed a 27-year-old man for not wearing a face mask. The man who has been identified as Ezekiel Odera was shot on Friday, November 27th and was rushed to the hospital where he later succumbed to excessive loss of blood. The incident has not been received well by the residents who have since held a demonstration in the streets to condemn the act.

"Locals demonstrated on Saturday, November 28. They lit bonfires and took off their masks in defiance causing a major traffic snarl-up at the border town. Teso North MP Edward Oku Kaunya condemned police brutality and called on the Inspector General of Police Hillary Mutyambai to bring the perpetrator to book. The MP reiterated that firearms were meant to be used to protect citizens rather than to scare them off. The incident took place a month after two police officers were arrested in Likuyani, Kakamega county in connection with the suspected murder of Denis Lusava, "Kenyan.co.ke reported.