Speaking to the press on Sunday, October 18, the individuals disclosed that they had noticed that the nine-storey building, that was still under construction, was leaning towards an adjacent residential 6-storey flat but the contractor ignored their warnings.

The contractor, according to the residents, explained that his highly skilled team of engineers was on site and had assured him that the building was fine.

"I was half awake when I heard the sound of soil collapsing. I woke up and the only thing I rescued was my duvet." 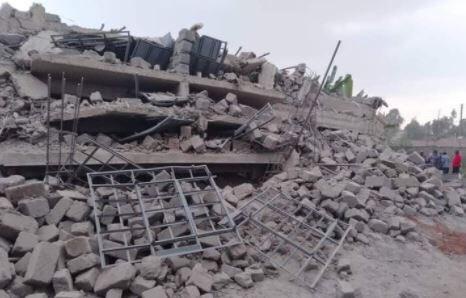 File image of the building that collapsed in Gachie, Kiambu county on Monday, August, 30.

"I saw the building was leaning onto this other one. It was bent from the fourth floor. We called the landlord and showed him, he told us that many engineers had assured him that it will not collapse," stated Rose Wanjiru, a survivor.

She further noted that the rest of her property was destroyed after the collapse that occurred on Sunday, October 17, 3am.

The residents had complained that the engineers did not follow proper steps during the construction of the house and that two days prior to its collapse, they had noticed the bend.

The cars, which were parked in the garage, were destroyed. The damage extended to an adjacent building leading to loss of properties valued at millions of shillings.

National Construction Association (NCA) Engineer, Margaret Ogai, noted that the matter was under probe by the agency.

At the time of the incident, there was no one inside the building, hence, no injuries or casualties were reported.

The incident came just days after a man was fatally injured when a building under construction along Parklands 5th Avenue collapsed on Thursday, October 7.

The incident left several other people nursing injuries at various health facilities in the city.