By kwambokaAngira (self media writer) | 1 month ago 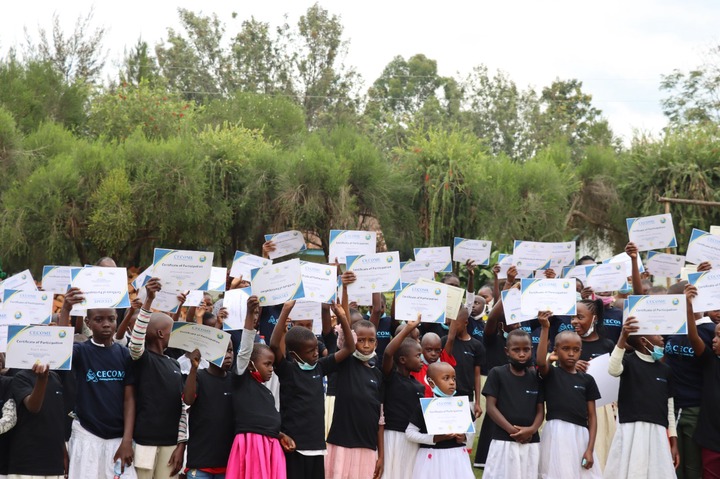 More than 200 minor girls who underwent Alternative Rites of Passage training have graduated in Kisii County men challenged to be in forefront in the fight against Female Genital Mutilation.

The girls graduated after a week of mentorship Programme organised by a Non-governmental organization International Solidarity Foundation (ISF), CECOME and Manga Heart.

The girls were trained on the effects of Female Genital Mutilation (FGM), sexual reproductive health, drug abuse and leadership skills by experts from various organizations.

Speaking during the graduation Community Mobilization and Empowerment Director Stella Achoki said that after finishing a one week training Programme they were taught about reproductive health, child rights, harmful and good cultural practices.

Ms Achoki still there is challenge to tame FGM in the region since it's medicalized.

"The practice is done my medics more so in private hospitals, “she says.

Ms Achoki despite the quality health care in the region with so many private hospitals around it had emerged some health care workers were carrying out FGM practices.

She stated that the practice has now moved to private clinics, within houses and estates.

She cited that the trend is hampering the fight against FGM so lawmakers and activists want the Ministry of Health and the Kenya Medical Practitioners and Dentists Board to revoke the licenses of doctors found culpable.

According to Achoki they will help the circumcisers to engage in other productive businesses that will give alternative means of livelihood,

Kisii County commander Francis Kooli said that the culprit who be found practicing it, will face the law.

"We will not relent to whoever will be caught practicing it,"he said.

Mr Kooli states that men can foster positive beliefs and attitudes and raise awareness on the impact of female genital mutilation to the health of women and girls, which can promote behavior change in men and boys through the identification and promotion of positive notions of masculinities.

"When we force children to undergo FGM, we violate children's rights, “he said.

Mr Kooli asked the parents to ensure they don't subject girls to such practices.

He challenged the community to incorporate men in the fight against FGM.

Kisii County Executive Member Ednah Kangwana said that community is slowly embracing Alternative Rite of Passage for girls, a ceremony that replaces and Female Genital Mutilation/Cutting and girl’s transition into womanhood without being circumcised.

“Community dialogue involving parents and boys as key stakeholders will also play a big role in ending the outlawed cultural practice,” she said.

Kiogoro assistant Commissioner Peter Nyandati , said that the sensitization on FGM is in line with the government declaration to end FGM by the Year 2022.

He said that the government is ready to assist those who are championing in the fight against FGM.

Studies done by Africa Coordinating Centre for the Abandonment of FGM show medicalization is rampant in Kisii County.

During the training, the girls were very positive and asked questions of things relevant to their lives. I believe they have a changed mind and will go out to preach Anti-FGM messages to their colleagues who were not able attend the training