By RIFT.VALLEY.NEWS (self meida writer) | 18 days 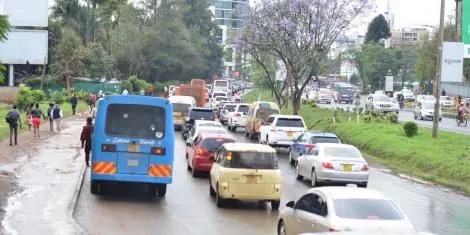 Police officers have launched a manhunt for a matatu tout who was accused of assaulting a female police officer on June 22.

The tout allegedly cut the officer on her right leg at Allsops stage along Thika Road at around 6 p.m.

Eyewitnesses claimed that an altercation ensued between the two after the officer boarded the bus from Nairobi CBD to Githurai.

"The bus conductor removed a machete and cut her on the right leg," a police report read, adding that they suspected the weapon was blunt, judging by the degree of the injury.

The police officer was rushed to a nearby hospital at Kasarani in Nairobi where she was admitted for a few days before she was released.

"We are investigating how and why the bus conductor removed the crude weapon and accidentally cut her," detectives disclosed.

They, however, did not explain why the case took nearly two weeks to commence.

The National Transport and Safety Authority (NTSA) may also investigate the Sacco, owners and driver to ascertain whether they are licensed and if the vehicle was roadworthy.

This case came a few days after a KMO Sacco was suspended for two weeks over an accident that led to the death of Melina Waithera, Deputy Inspector General's (DIG) Edward Mbugua's daughter.

Gitonga Maina, the Sacco owner was found guilty of allowing an unroadworthy motor vehicle to operate under the union. Maina was sentenced to three months in prison - with the option of a Ksh35,000 fine.

The driver Patrick Macharia Magu was charged in court but released on a Ksh300,000 cash bail pending a hearing.

Waithera succumbed to head injuries after she was sandwiched between two matatus at Tom Mboya Street.