By Kenyanewszjunky (self meida writer) | 23 days 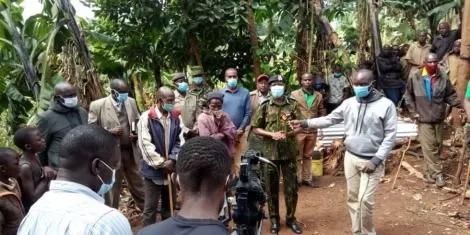 Administrative Police officers and journalists have joined forces to construct a house for a poverty stricken family after their appeal went viral.

According to Kenya News Agency, the family, which hails from Mogenche village, Bomachoge Borabu Sub-County, Kisii, explained that it had been rendered homeless due to poverty as well as chronic illnesses.

Their neighbours reached out to local journalists who shared the images of the family led by Henry Nyabuto which went viral online.

Well wishers, police officers and journalists who were touched by the plight chipped in to offer financial support as well as food for the family of 12 members.

Kisii County Police Commander Francis Kooli, who was part of the troop, also confirmed that part of the money contributed for the family would be channelled to the construction of a house.

He also commended the work of the police as well as journalists for coming together to help an afflicted family in their midst.

A villager, who attended the event, testified that police had a humane side noting that he always ran away when he saw the men and women in uniform.

"For a very long time,society has viewed the police as unfriendly. Some of us even disappear into thickets immediately we see them on the road.

"But what the police have done for this family is a clear show of humanity and humility,” explained the villager.

This comes a month after journalists in Kakamega went beyond the call of duty of highlighting the plight of a widow in the area who had been living in a house with nylon walls to make her abode more livable.

The scribes led by KBC's Fredrick Mukhamwi had reported on her story where the woman, Mama Dorina, whose husband had died years ago led a destitute life in a shanty structure.

"We found her living in a structure that was not fitting and beyond reporting, we decided to take action on it as well," Mukhamwi explained.

The reporters made a point of initiating a WhatsApp group where they raised money for her home renovation. A total of 60 journalists contributed and the team on the ground set out to put up a new structure for the widow.

On her part, Mama Dorina could not hide her excitement for the kind gesture highlight the troubles she faced living in the shanty including fearing for her safety.

"The house used to be cold because I did not have walls and I used to get very sick because of that. These journalists found me when I was heading towards dying," the widow recalled.

Sad: Form 4 Student Collapses and Dies On His Way Back To School

Just in: Caroline Kangogo to be Buried Today; No Police Honors Expected at Funeral

Innocent Kalio's Father Now Asks Police Why They Released Him From Jail After Killing His Brother.