Should Kenyans Worry Over Rising Cases Of Police Brutality?

Should Kenyans worry about rising cases of police brutality?

The recent spate of extra judicial killings by the police is of great concern. Over 20 Kenyans have lost their lives over Covid-19 curfew and on suspicions of being criminals. How will the authority fight this menace? Dan Murugu, Nakuru

In line with Section 25 of the Ipoa Act and in enforcement of the National Police Service Sixth Schedule of the NPS Act of 2011 on the use of force, Ipoa commits to investigate all deaths and injuries on civilians arising from excessive use of force in the course of police work. Upon concluding these investigations, Ipoa will recommend for prosecution or disciplinary action against all culpable officers.

The next General Election is less than a year away and Kenyans are concerned that police brutality may rear its ugly head again during this period. Please assure Kenyans this won’t happen? Komen Moris, Eldoret

The authority has for the last two years beefed up its investigations team to be able to handle the increasing number of complaints. Ipoa has also commissioned a continuous monitoring assessment of the emerging trends and patterns in policing, which will inform top-level decision making on its work. Apart from making operational recommendations to the NPS, this will determine how Ipoa will monitor police operations and investigate police conduct.

There has been cover-up in cases involving police killings. How is the authority handling this? Komen Moris, Eldoret

Indeed, cover-ups bedevil police accountability worldwide. Where it has occurred, Ipoa’s resolution has been to hold to account all involved officers for frustrating justice. Further, the authority has also pursued command responsibility for senior officers in-charge of lower rank officers for failing to undertake their managerial functions.

Shouldn’t the police curriculum be revised to align it with our human rights focused constitution? Dan Ondieki, Nairobi

The law prescribes that police officers must endeavour to minimise the use of force in the course of their work. It further outlines that where force must be used, it must be proportionate to the situation. Whenever excessive force is used, Ipoa conducts investigations to ensure justice is done.

Your recommendations for prosecution or other disciplinary measures mostly target junior police officers like constables and corporals. We rarely hear of Ipoa holding to account senior officers who give instructions to their juniors, say during riots. Kindly address this anomaly. Fred Kilonzo, Nairobi

In most instances, contact between the police and the public happens with officers in the lower ranks hence the higher percentage of our investigations are directed at them.

We have also, however, made recommendations specifically targeted at senior police officers especially where they give unlawful orders or where they do not take overall managerial and operational responsibility over the work of their juniors.

On the night of August 17, Jetro Okwiri Obulo, 32, was fatally shot by a Kenya Forest ranger in Lugari Forest near Lumama in Kakamega County over allegations of illegal logging. Is Ipoa mandated to investigate such deaths arising from other members of disciplined force apart from the police? If yes, what progress has been made in the case? Francis Awiti, Kakamega

Ipoa’s mandate limits the authority’s work to the oversight of the National Police Service personnel only.

How long should Ipoa take to investigate a matter and have it concluded once a complaint has been lodged? Karani Arnold

All investigations are unique and the time taken to complete them also differs. Completion is certainly hastened by availability of witnesses, expert reports and testaments besides the evidentiary threshold being strong enough to sustain a case. You can also call our contact centre at no cost through toll-free number 1559 for an update of your case.

All police officers are subject to the same criminal and disciplinary actions when they commit offences. Begin by lodging a complaint against such an officer. If our investigations establish that he is culpable, then the law shall take its course.

Ipoa thus monitors how the IAU undertakes its work. The difference between the two institutions is that one is run by police officers while the other is run by civilians.

The Teachers Service Commission has come up with a way of naming and shaming rogue teachers who have been caught in disciplinary issues and struck off the roll. Would Ipoa, in consultation with the National Police Service Commission, consider such an approach? Maryann Omondi, Ahero

We will certainly discuss it amongst ourselves and the other security agencies and explore how best to implement this. Ipoa, however, publishes an inventory of all police officers found culpable of misconduct by its investigations annually in its performance reports available online.

What do you think the public is not doing right that sometimes necessitates the police to resort to violence? Janetrix Mwangi, Dagoretti

Ipoa conducts public and police officer sensitisation on its work and their policing rights. Part of this outreach activities entail educating the public on responsible citizenry. Police officers are also educated on the use of force in their contact with the public.

The number of convictions of rogue police officers remain low in comparison to the number of complaints Ipoa receives. Some cases like CDPE/Feb/19/24 are still pending at your offices. Why is this so? George Wahome, Nyahururu

Our desired outcome is facilitate the National Police Service to become a fully professional service . We aim to do this through recommending policy change, improvement of operational procedures, suggesting best practice and when this fails, making recommendations for disciplinary and criminal action. For your case, the reference you have provided does not align with how we number our cases.

We use an Electronic Content Management System, which is foolproof and ensures there is accountability for every report filed. 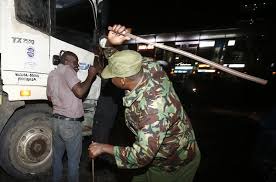 The intelligent system further assigns references to every report keyed in. This reference number is, therefore, not traceable to our system and more importantly, it bears no characteristics to those generated by Ipoa ECM system. I encourage you to contact any of our offices for clarification.

Mother Of Murdered Children Shares Her Pain On Social media