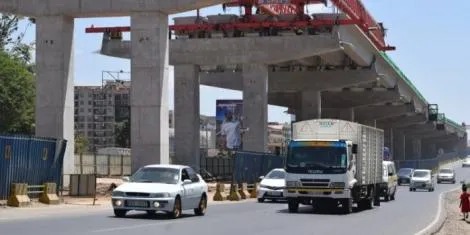 The Kenya National Highways Authority (KENHA) has released an update on the Nairobi Expressway construction project, which is disrupting traffic flow along Mombasa Road.

The ongoing construction works on various portions of the highway will cause traffic disruption in five areas along the expressway, according to a public notice posted on Tuesday, November 7.Most significantly, the administration reported that a service lane from Allpack Service Road to Mombasa Road had been stopped, providing motorists with an alternative route."To relieve congestion on the main highway, access from the service lane has been prohibited. At Mlolongo, motorists on the service road can do a U-turn "Read the sign carefully.

Additionally, the alert stated that traffic would be expected at the Gateway Mall, where an oil pipeline that spans the freeway is currently being evacuated.The General Motors area, Capital Center, and Bunyala Roundabout extending to University Way are some of the other sections highlighted in the notification as numerous works are underway.

Furthermore, the road administration issued a warning to motorists about the possibility of flooding, which has already occurred on some routes in the city. Plans to remedy the problem were revealed by KeNHA."Various areas of the road have experienced flooding as a result of the continuous rains, and civil and drainage works have been prioritized in the affected sections," the road agency warned.

In their notification, KeNHA also stated that they were monitoring traffic flow between Mlolongo and Westlands to ensure that vehicles could move freely.The portion between Haile Selassie and the University Way Roundabout and Gateway Mall, which had been closed, would reopen on December 15 as planned, according to KeNHA."The elevated segment of the road is 93 percent complete, while the operation of the monitoring center is 98 percent complete."

Start planting this fruit and get 1.2 million Kenyan shillings within a short period of time.