By Kenyanewzjunky.co.ke (self meida writer) | 1 months 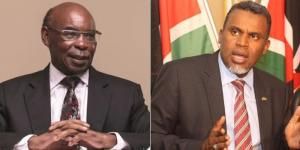 Media mogul Samuel Kamau Macharia is now accusing the Director of Public Prosecutions, Noordin Haji, of failing to act in a case involving 14 persons of interest in a matter relating to finances and shares of DirectLine Assurance Company, his late son's firm.

SK Macharia is seeking to sue the DPP over what he terms as declining to prosecute the 14, despite reportedly having incriminating evidence against them.

The media mogul is also accusing Haji of partisanship and failure to execute his constitutional mandate.

Macharia wants the 14 suspects to face charges relating to criminal offences to the shares and finances of the Directline Assurance Company.These allegations, the media mogul stated, could be traced back to as far as the year 2011.

"The 14 intended accused allegedly involved in fraudulent transfers of shares in Directline Assurance Company Limited by some of the directors now listed as the intended accused," states SK Macharia in court papers.

Other allegations included embezzlement of company funds, obtaining money fraudulently, purchase of estates using company funds and identity. Macharia and Directline officials added that they unsuccessfully lodged their complaints with the police and the DPP.

The businessman filed a trail of communication including a letter dated March 18, 2021, in which Haji informed Mutyambai that the Office of the Director of Public Prosecution could not establish the criminal offences against the 14 suspects.

"We are highly frustrated," Macharia stated through his lawyers, who served all the respondents in the case.

The Chief Magistrate’s court in Nairobi scheduled the case for hearing on Tuesday, September 17, 2021.

Macharia’s son and the proprietor of Directline, the late John Gichia, passed away in 2018. On July 28, the court granted Gichia’s son, Adam Kamau Macharia, authority to manage his father’s estate and firms.

Kamau had sued his grandfather, SK Macharia, seeking control over the estate.

Content created and supplied by: Kenyanewzjunky.co.ke (via Opera News )

Beautiful Photos Of Ferdinand Omanyala And Wife Training That Has Elicited Reactions Online.