By Brianlamarc (self media writer) | 1 month ago 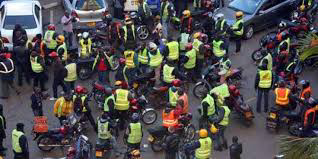 Relatives of one of the Boda Boda operators killed by a rogue police officer who went on a shooting spree in Kabete have opened up on the burden that has been thrown at them, following the demise of their breadwinner.The Boda Boda rider, who is identified as Gabriel Mutua, was on his way home after delivering pieces of bread to his customers when he met his untimely death.

His wife Angeline Kitetu and sister have opened up on the sad reality facing them following his death.

Speaking to the media at City Mortuary where they confirmed their kin had passed away, Angeline said she was expecting her husband home when she received reports that he had lost his life.

“Gabriel has a big family that depends on him I was the one staying with him here in the City.

“He is a man who loves hustling for himself. He told me he was on his way home but unfortunately, that is when he was shot,” she said.

According to her, Mutua has three wives and more than 10 children.

None of these children have finished form four.

He was also the breadwinner of his extended family.

“He is the one we depended on. He has more than 10 children and none of them has finished even form four.

“Three wives depend on him. Who is going to take care of us now?” she posed.

Mutua’s younger sister regretted his death, saying he is the one she depended on for survival.

According to her, it is just a month after they laid their mother to rest and Mutua was the one taking care of the family.

“He was my elder brother. We had just buried our mother last month and he was the one taking care of us as a family.

“Why is the government putting us down like this?

“My brother was the one schooling my children. He used to even pay my rent. So what am I going to do now?” she posed.

The killings sparked protests in Kangemi as residents barricaded Waiyaki Way and burnt tyres to express their anger over the fatal shootings.

Content created and supplied by: Brianlamarc (via Opera News )