By Confessions2 (self media writer) | 17 days ago

Police officers from Nakuru were lucky enough to arrest a man who is reported to have fled from their custody after committing running over several vehicles along a busy Highway.

The suspect who has been identified as Samson Siele allegedly run over one of the vehicles along a busy road after which he was taken in for questioning. However,he is reported to have fled from the Police after tricking them.

However, the man who didn’t know that his days were numbered allegedly tried to pass over a police check point before he was allegedly arrested and taken in for questioning following an incident that happened in the past.

Things would later escalate forcing police officers to withdraw their guns after realizing that the suspect has a home made gun. Due to this reason , the suspect is being interrogated in order to find our wither or not he is a weapon traffickers.

In the past few months, several Kenyans have lost their lives in murder among other crime related issues and for this reason, Kenyans have been urged to report any suspicious activities in the country in order to reduce the ongoing tension.

Kenyans who expressed their opinions and suggestions on the matter have called out the government accusing them of being the ones behind the increasing crime in the country. For most Kenyans, employment will reduce the rate of crime in Kenya.

For most Kenyans, they accused these officers of loaning their guns to these thugs as it has been witnessed in the past. 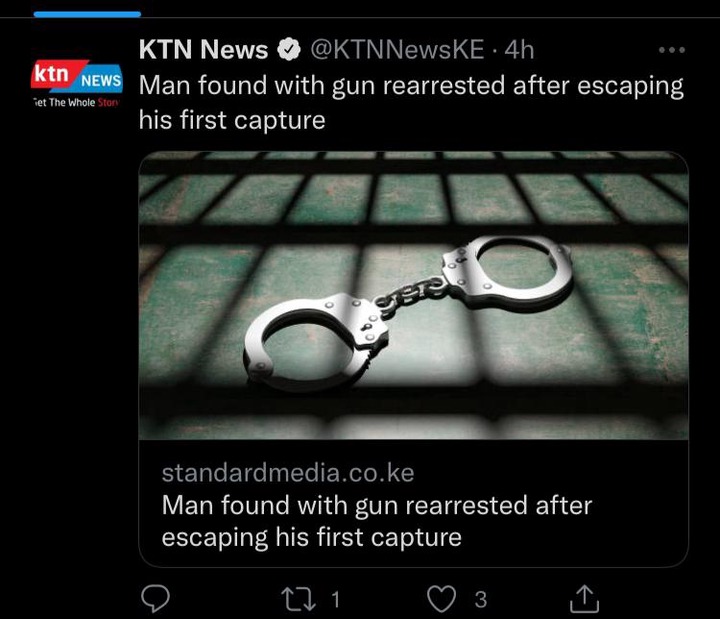 Things that drive men away from women

Rue Baby Forced To Block Fans After They Body Shamed Her On Social Media.

'Sina Muda Wake' Ngilu Reveals Why Ruto Is Useless to Her

Revealed: How Muranga Traders Are Painting Avocados to Dupe Kenyans