By Protichsingoe (self media writer) | 9 months ago 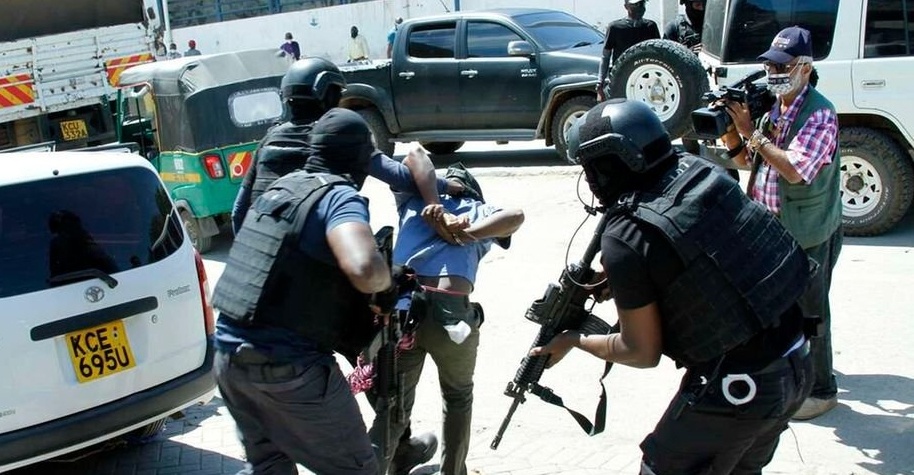 Police in Mombasa are having difficulty explaining the circumstances under which a businessman who is alleged to be a terror suspect was kidnapped by people alleged to be police officers.

The 40-year-old businessman had just attended prayers at a Mosque in Kuze, Old Town and to date, his whereabouts remain a mystery.

Five days after Sagar went missing, Coast regional security committee chairman John Elungatta intimated that the terror suspect had been arrested by police and was assisting with investigations.

The police further announced more arrests using the information the businessman had provided earlier but the suspect was not produced in court as required by law despite a promise by the security bosses that he would be arraigned. 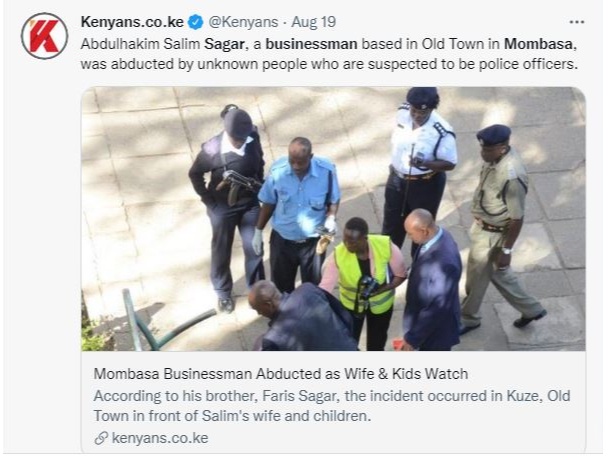 Surprisingly, the matter took a new twist last Friday when Coast Regional Police Commander Manase Musyoka contrasted with Elungata in a sworn affidavit refuting that the father of four was arrested by the police or was in police custody.

According to the police boss, the only information he is aware of concerning the matter is a missing person report circulated by Central Police Station, Mombasa, requesting all police stations across the country to assist in tracing Sagar.

“At no time was Mr Sagar arrested or detained by the police,” Musyoka said adding that Sagar has been religiously reporting to the investigating officer once a month since being released from custody in 2018.

The regional police boss further intimated that there was no new detail or complaint lodged with the police to warrant fresh investigations, arrest or detention of Sagar.

The regional police boss was responding to a case filed by Sagar’s family, in which they want the police compelled to produce the businessman dead or alive.

According to Musyoka, the owner of the vehicle, registration number KBQ 035C, which was allegedly used to abduct Mr Sagar, is not yet known and the vehicle has not been recovered to date. 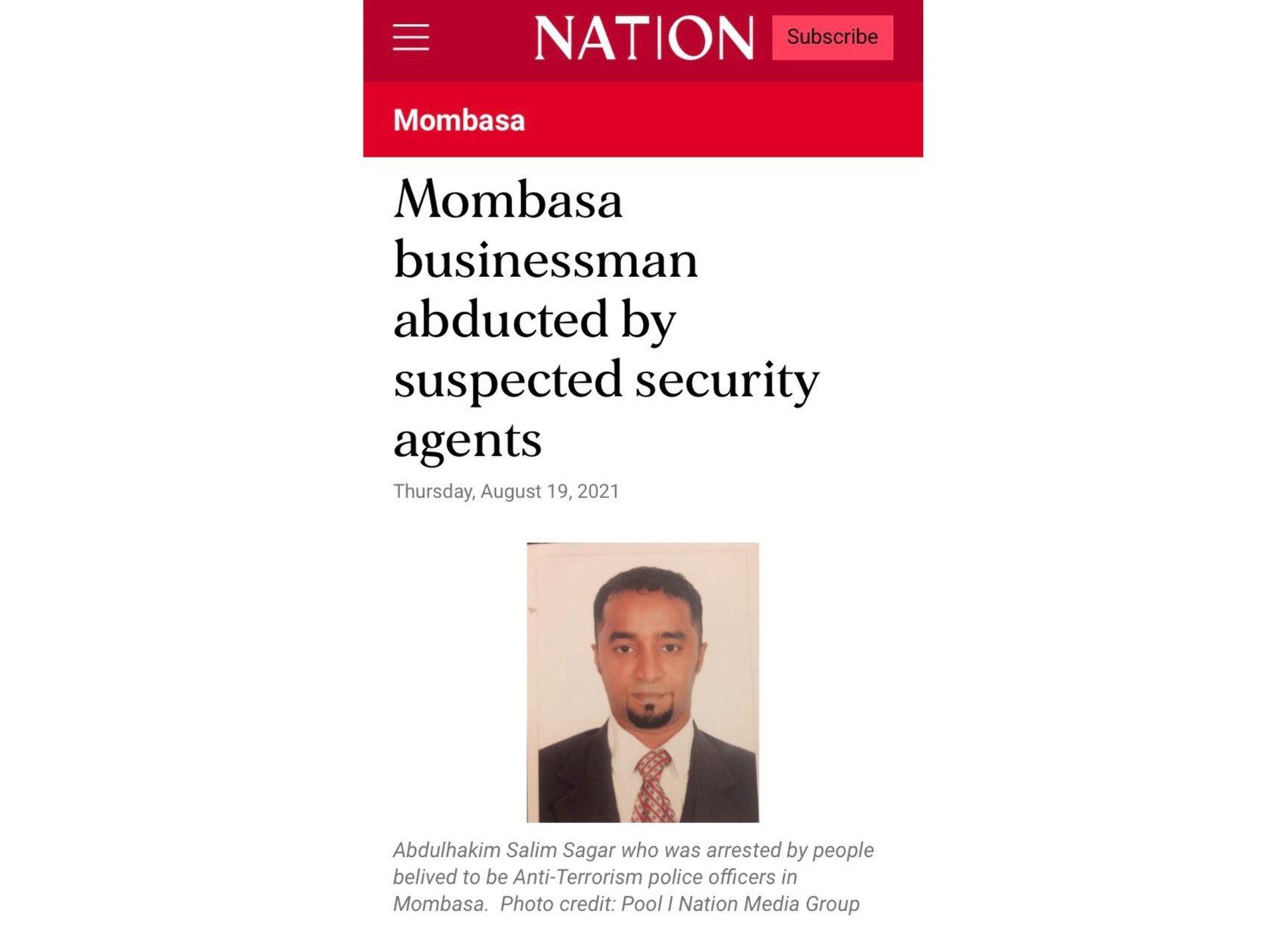 “I request that the petitioner be directed to provide witnesses ... to assist the police with their investigations on the whereabouts of Mr Sagar. This court may also invite any other independent body to conduct investigations on Sagar’s disappearance,” Musyoka stated.

Through lawyer Mbugua Murithi, Sagar's family accused the police of failing to provide details of the man’s whereabouts as Mr Murithi said the response failed to address the pertinent issue that the family has raised in the case.

“The affidavit by Mr Musyoka is very ominous on the fate of the subject (Sagar). It is a denial, it suggests that the subject has disappeared, that is the long and short of the document,” Muriithi said claiming that police are shielding the owner of the vehicle used in the abduction.

The lawyer told the court that he is ready to swear an affidavit to confirm that Elungata told the family, in their several visits to his office, that the suspect was in their custody and would be produced in court.

“Even Mombasa Senator Mohamed Faki is ready to swear an affidavit to confirm that Mr Elungata told us the police were holding Mr Sagar,” Muriithi noted.

Appearing for the National Police Service, Emmanuel Makuto reiterated the service's official stand that Mr Sagar had not been arrested and neither was he in custody.

According to Faris, seven plainclothes police officers confronted his brother Sagar before arresting him and he is said to have been in the company of his two children when he was arrested. 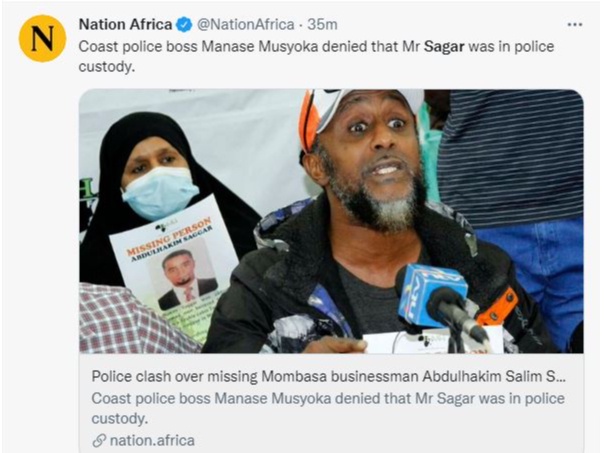 Sagar's family further claimed that the businessman had received threats before his abduction. Sagar has had a continuing terror-related case at the Shanzu Law Courts since 2018.

Since his release on bond, the businessman had been reporting to the investigating officer once a month. Sagar was charged with possessing terror-related materials on his mobile phone in 2018 and his case is pending.

According to the family lawyer, Mr Sagar’s two accomplices, with whom he was charged in 2018, vanished the same way and have never been seen since.

Sagar's case adds to the long list of men who have disappeared without a trace after being seized by people their relatives say were police officers.

According to Missing Voices Kenya, a group of human rights organisations, five cases of enforced disappearance and 13 cases of extra-judicial killings have been recorded between 2019 and 2021.

Just last week on Wednesday, Somali scholar Abdiwahab Sheikh was abducted in Nairobi and by Sunday, September 12, his whereabouts remained unknown, with police saying they are pursuing his abductors.

According to Supreme Council of Kenya Muslims (Supkem) deputy national chairman Shariff Khitamy, members of the Somali community and local leaders have termed the trend as worrying and called for investigations into the abduction of people suspected to have terror links.

“We are appealing to President Uhuru Kenyatta to intervene,” Mohamed Ibrahim, chairman of the Coast Somali Community, stated. 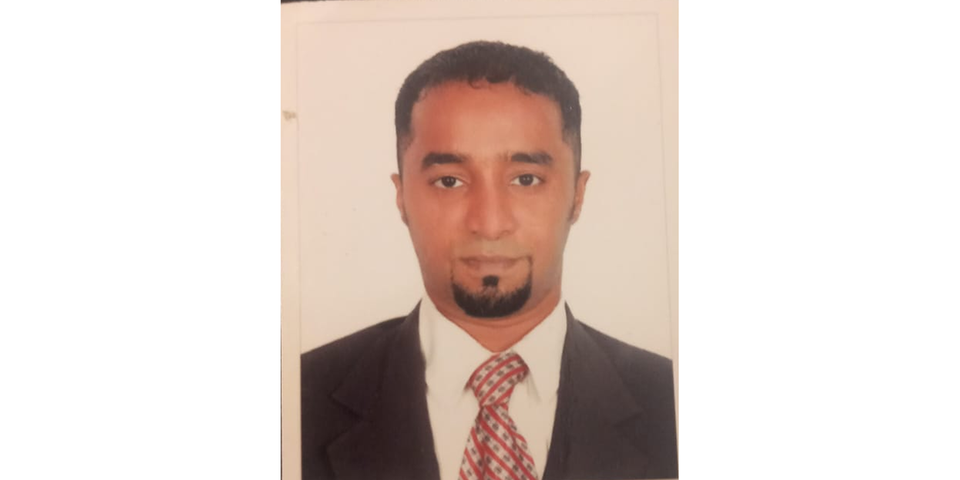 “Why aren’t they taken to court? Why abduct them? Where are they?’’ Ibrahim wondered while urging security agencies to reveal their whereabouts.

Mvita MP Abdulswamad Nassir said the National Assembly will bring a censure motion against those in charge of security next week.

“If we continue keeping quiet, we will be condoning an injustice,"

"The professor’s abduction is similar to that of Sagar and we must end this. I personally called Mr Elungatta who confirmed that Mr Sagar was in their custody but he has now changed tune. People are losing faith in the police,” Nassir said.

“Inspector-General of Police Hillary Mutyambai, Interior Cabinet Secretary Fred Matiang’i and the President should remember that [the kidnap victims] are also Kenyans,” he added. Sagar's disappearance has now raised eyebrows among the public.