Panic in Makueni After a Vehicle Explodes Under Unclear Circumstances

Residents of Makueni were left puzzled following an incident that happened in broad daylight after a vehicle allegedly exploded under unclear circumstances.

Taking to his Twitter account to express his concerns and fear after the incident, a Twitter user who has been identified as Kasyoki Buddy claimed that the vehicle allegedly caught fire under unclear circumstances.

Luckily, he went ahead and added that no one was injured at the time of the explosion adding that the owner of the vehicle was going by his daily activities in a nearby office.

This is happening at the same time when the National Transport and Safety Authority has called upon all kenyan drivers and road users to make sure they follow all the traffic rules and regulations in order to reduce the increasing rate of accidents in the country.

According to the reports given by the ntsa, they claimed that the recent accident statistics have revealed that most of the accidents in Kenya are being caused by choice made by several drivers who for one reason or another, choose not obey road rules.

At the same time, a number of kenyans who expressed their opinions and suggestions on the matter and on what might have caused this have called upon kenyans to follow the due process while parking their vehicle.

According to the reports given by most Kenyans, they claimed that most of these accidents or rather explosions are often caused by drivers lack of using safety measures to park their vehicles.

While reacting to this incident, Ken Mutai suggested that one should never alight without checking their vehicle very well, according to the reports given by Mutai, he claimed that , maybe the owner of the car left the engine on and at the same time, left the vehicle near a gas. 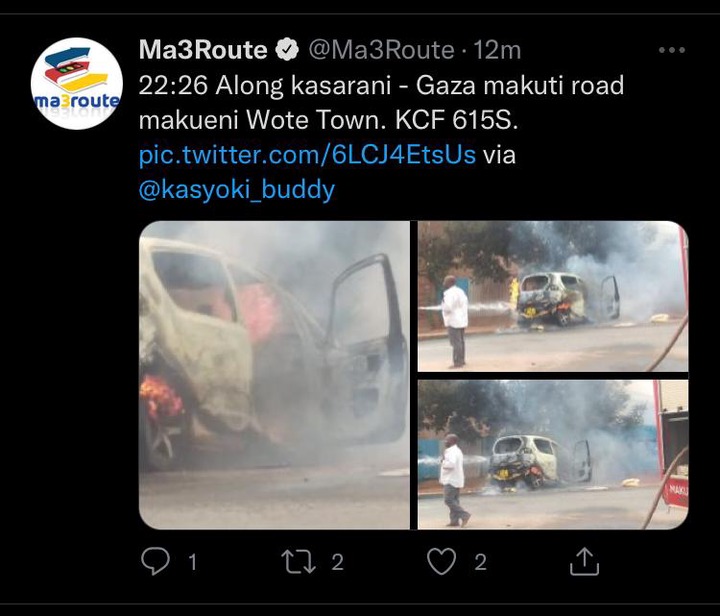 Signs You Are with the Wrong Person ( in a Complicated Relationship)

Traffic Jam Causes Woman To Give Birth On Roadside