By Kimwanga (self media writer) | 6 months ago

Caroline Kagongo’s husband Does Unexpected at The Funeral Leaving Mourners to Wonder. 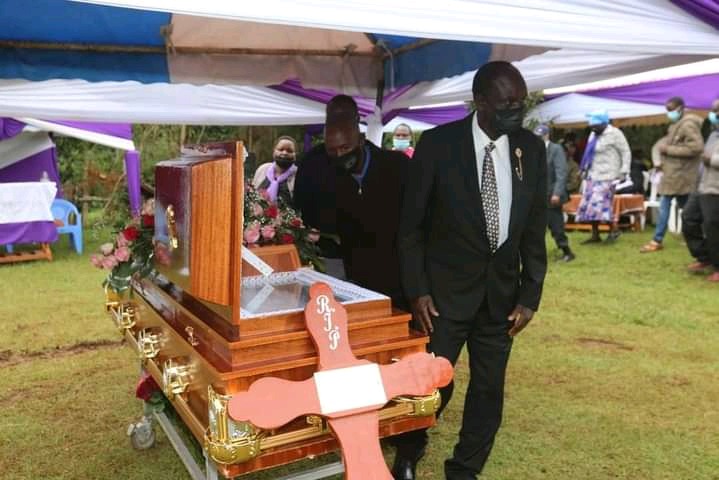 The husband of Caroline Kagongo, who is a senior cop at Maritime Police Unit based in Mombasa County refused to speak when asked to address mourners.Richard Ng’eno was part of the mourners who arrived early at the burial event which was taking place in Iten, Elgeyo Marakwet County on Thursday, July 29.

When asked to address mourners, the husband who maintained a low profile due to the nature of his job refused to do so. During the funeral, Richard sat near his daughter and son plus the parents of the late cop and was in dark sunglasses.He was also accompanied by members of his family from Bomet County.

It remains unclear why her husband did not address the mourners in the death of his wife of over ten years.However, when Kagongo’s parents took to the dais, they mourned their daughter as hardworking and also dismissed claims that she had parted ways with her husband.

Also present at the event were officers who worked with her in Nakuru County.It has also emerged that the family decided to honour a request she made just before she allegedly committed suicide within her father’s compound.

The body was fitted with a wedding dress as per her wish in some text messages that were found on her phone by detectives attached to the Directorate of Criminal Investigation (DCI).However, the family decided not to cremate her body as she had requested and instead decided to bury her as per Christian values.

Content created and supplied by: Kimwanga (via Opera News )

Get rid of smelly armpits with these natural tips

"What Are You Chasing That Is Costing You All That You Have" Grace Ekirapa Serves Food For Thought.

The 5 Types of Women That Men Fall in Love With

Why replacing a missing tooth is so expensive

Just In: Bad News to NHIF Patients as Association of Private Hospitals Plans to Deny Them Services

Top 10 Friendliest Counties To Easily Do Business in Kenya