By MrJuma (self media writer) | 6 months ago

A family in Nairobi is searching for their missing kin who was reportedly abducted at gunpoint in broad daylight in South C on Tuesday 2/2 2022. The missing man identified as Roba Adbuba Sereka, aged 60 years, was running his errands near Green Valley Shopping Centre between 10-11 am on the fateful day when he was confronted by unknown people and abducted at gunpoint.

A CCTV footage obtained from the mall showed the victim being bundled into a white Toyota Landcruiser whose number plate has not been established. His family reported the matter to the police but so far, they have not gotten information concerning his whereabouts.

Haki Africa, a human rights organization, is urging members of the public to share any information on the whereabouts of the missing man.

"HAKI Africa together with the family of Roba Abduba Sereka appeal to the public to share any information on his whereabouts. Roba went missing on Tuesday 2nd February 2022. His family has been searching for him ever since and his whereabouts remain unknown," A tweet by the human rights body reads. 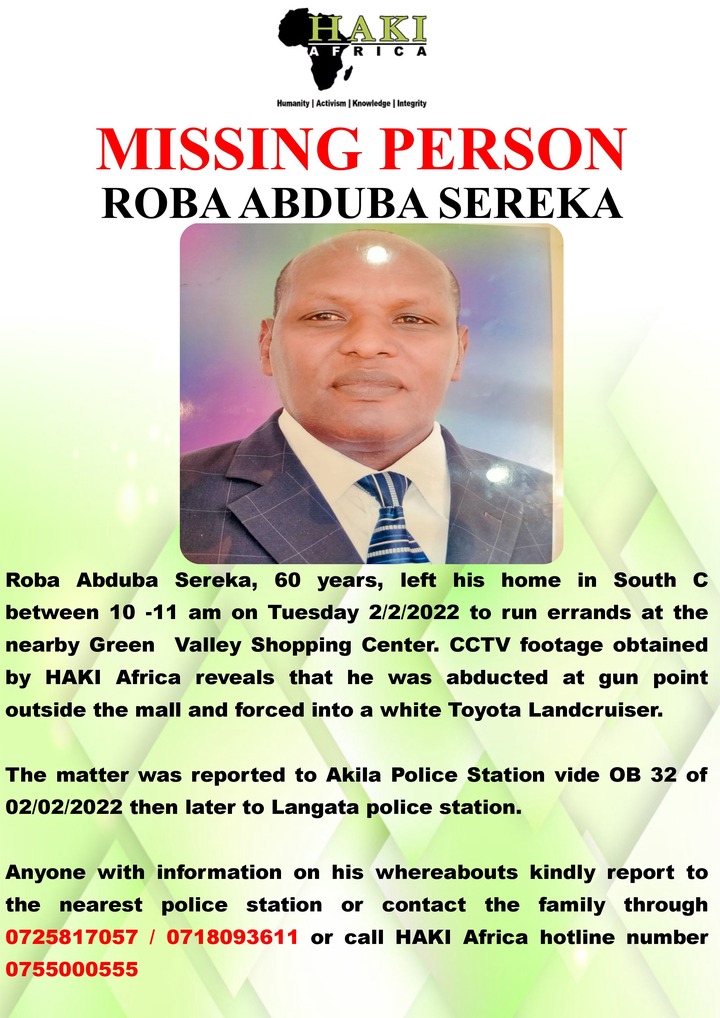 Roba adds to the long list of Kenyans who have disappeared in the recent past after being abducted by unknown people in broad daylight. An alarm was recently raised after some bodies were found dumped in River Yala after the victims were reportedly abducted.

Lawyer Ahmednasir: Why losers of the 2022 presidential poll may not go to Supreme Court