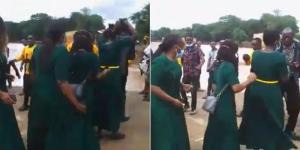 A video footage on the last moments of 20 members of the Mwingi Catholic Church choir who died after the bus they were travelling in plunged into Enziu River in Mwingi East area of Kitui County has emerged.

In the videos obtained the choir members are seen dancing and singing in a circle on the banks of Enziu River moments before they boarded the bus.

The women, who donned green dresses, were joined by their male counterparts in singing as the team waited for the water levels to go down before crossing.

Sadly, this was also the last time some of the choir members would be seen alive as the bus capsized moments later while crossing to the other side of the river.

"A bus drowned here and we are still recovering bodies that are still inside the bus. The bus is not even visible, it has been submerged.

The bus was swept away as it crossed the swollen river and as the residents watched helplessly.

Screams and wails could be heard as divers jumped into the river to rescue the passengers who were trapped in the bus.

Reports indicated that members of the bridal party, a woman, her three children and two grandchildren, were also in the bus.

"This is a river and it was flooding. The driver lost control and slid into a ditch. The bus capsized next to the bridge. The driver has also died. The bus was leaving Mwingi Central towards Nuu in Mwingi East," he noted.

Accidents have been on the rise ahead of the festive season with the latest National Transport and Safety Authority (NTSA) figures indicating that 3,212 died in road accidents between January and September 2021, an increase from 2,560 who died similar period last year.