The Mother of Brian Mbage, a 17-year-old boy who was allegedly clobbered to death after accessing Komothai Girls’ High School in Githunguri, Kiambu County, dormitory illegally has spoken out.

According to Mary Mbage, she believes that her son did not died out of injuries inflicted by girls from Komothai but there is more to his death. She said that the injuries on her sons body especially on his head are not as a result of beatings but of a trauma.

"I have seen the body of my son, and I am so saddened. The injuries on his body do not show any [signs of] beatings, but the ones on his head show he died from trauma,” said the distraught mother from her Ngegu home.

The school management is allegedly said to have informed Brian's family that he had jumped from the fourth floor and that's how he sustained the injuries.

Brian and 5 other boys are allegedly said to have accessed the girls dormitory on Wednesday night for unknown reasons. 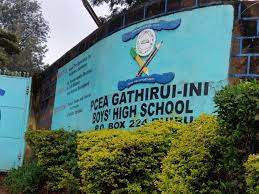 However, their motive at the institution was cut short after the girls noticed their uninvited presence and raised alarm.

Security guards, teachers and students who responded top the alarm are said to have cornered Brian and beat him leaving him with serious injuries that later resulted to his death.

Detectives from Directorate of Criminal investigation have cautioned citizens against taking matters of law into their own hands. They have further requested the two schools to remain calm as they continued with investigations.

Brian Mbage was a form four student who was expected to sit for his national examination come March next year.