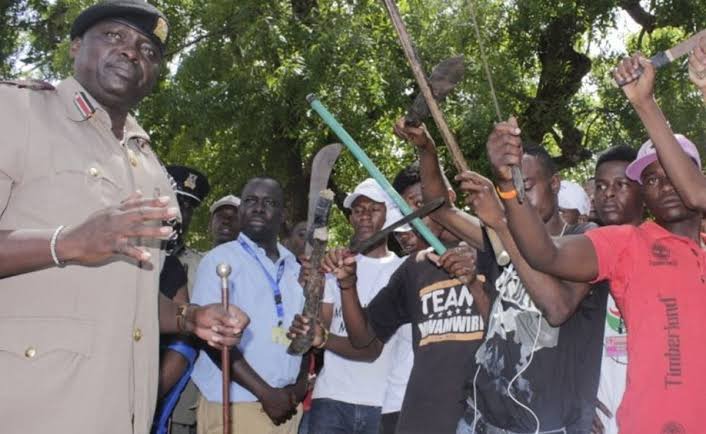 It was a long night for residents in Nyali after an armed gang known as “Wakali kwanza” attacked people with knives and pangas injuring 7 people. Police in Nyali Mombasa County has now launched a manhunt for the gang that has been terrorizing residents in Kisauni.

According to an eyewitness, who is also a motorcycle rider, he was approached by a gang member who was wielding a club and a panga. As the gangster swung the club at him, he blocked him prompting the gangster to hit his arm with the panga before he fled the scene.

Residents say there were about 20 gang members who were scattered everywhere. A source revealed to NTV that wealthy and influential individuals are financing the gang. The nation of “Wakali Kwanza” has waged terror on the residents of Mombasa. Many are now living in fear. Confirming the incident Nyali OCPD Daniel Mumasaba said two people have been arrested and are at Kazandani Police Station awaiting to be arraigned in court with charges of robbery with violence. Police also recovered a homemade petrol bomb. Investigations into the incident are ongoing.

Khaligraph Jones Words On DP Ruto And Wakadinali As He Brags Not To Be Following Any Curfew Rule.

Alikiba Does It Again With His New Song Video Out Now