By HustlerNation1 (self media writer) | 9 months ago 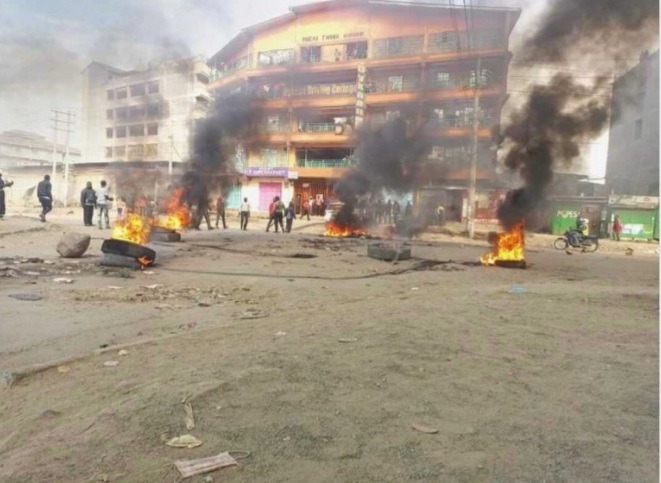 The deceased, identified as John Kiiru, 38, is believed to have died on Wednesday evening after being beaten for breaking the dawn-to-dusk curfew.

This has led angry residents to engage the police in battles and to close the main roads leading into and out of the estate.

Residents who spoke to Nairobi News said the victim whose body still lay at the Tushauriane scene at noon on Thursday was on his way home when police attacked him.

The rider of the motorcycle he was on, however, managed to escape.

Before he died, he managed to call his wife Esther Wanjiru, informing her that he had been brutalized by police officers, only to have his body found at the scene of the attack in the morning.

Attempts by the police to remove Kiiru's body from the scene met with opposition.

The police were pushed back by residents, who threw stones and lit fires along the roads, preventing the authorities from recovering the body of the deceased.

There has been an increase in cases of police murders during the application of Covid-19 rules.

On Tuesday, 6 police officers indicted for the murder of two Embu brothers were arrested.

They were not, however, required to plead charges.

They are accused of having killed Emmanuel Mutura and Benson Njiru, whose bodies were found in the morgue on August 3, following their arrest on August 1.

On Wednesday, two police officers accused of inflicting serious injuries on a man in Mathare, resulting in his death were arrested.

The two, an inspector and a corporal, face murder charges.

According to the Independent Police Oversight Authority (IPOA), the actions of both led to the death of Vitalis Owino Ochillo aka Madaraka. The incident took place in the Mradi neighborhood of Mathare North in Nairobi on May 3.

"Death falls within the IPOA's mandate to hold the police accountable," IPOA President Anne Makori said in a statement to Newsrooms.

Ochillo died of injuries sustained after his arrest by police enforcing curfew orders. It was around 7 p.m.