Exposed: What Nakuru Fake Magistrate Did With State Officials That Shocked Kenyans 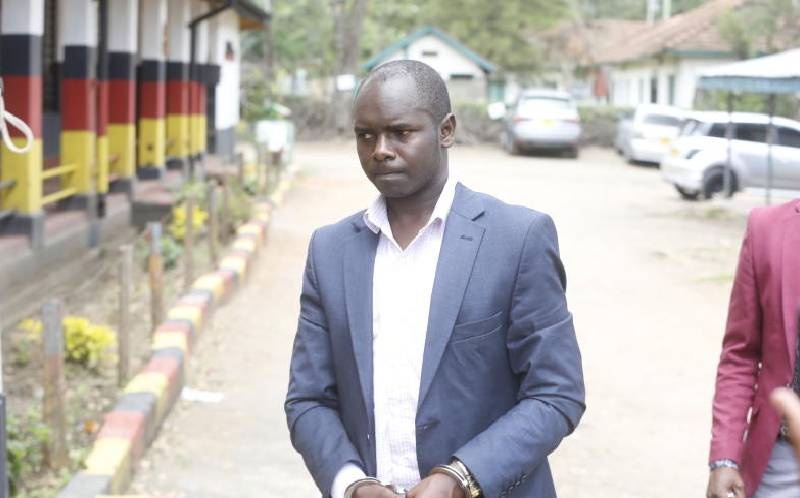 Last weekend reports of a man in Nakuru masquerading as a magistrate spread online like wild fire with Kenyans being shocked on how the man ran his errands.

According to impeccable sources on Tuesday, October 12, the man has a litany of cases stretching through three counties in the South Rift region and he was arrested for allegedly impersonating a magistrate and defrauding members of the public of Sh1.6 million.

In the previous two years, Victor Kiprono Ngeno has deceived ordinary citizens, officials, and police officers in Kericho, Bomet, and Narok counties by posing as a Nakuru-based senior magistrate.

"In the region, he has a number of charges ranging from impersonation to acquiring money under false pretenses. Now that he's been busted, we shouldn't be surprised if other people come out," said a senior police official in Bomet who was briefed on the situation.

He is known at local nightclubs as a generous man who walks about with wads of cash and serves rounds of drinks until the small hours of the morning. 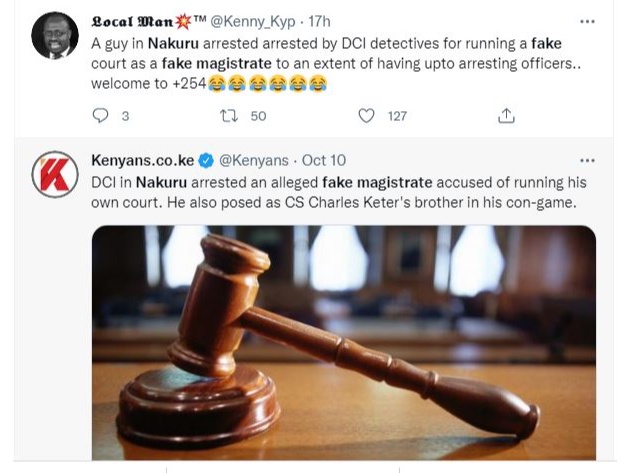 However, the man's luck ran out when he was detained in Bomet County on July 9 for impersonating and providing false information to a police officer.

Mr Ngeno reportedly walked into Mogosiek Police Station on July 8 and said that he had been robbed in broad daylight of Sh500,000 by an Administration Police officer he knew.

He claimed to be a major magistrate in an event recorded under Occurrence Book (OB) number 12/08/07/2021, in which he said the officer and a female companion robbed him of money and shoved him out of a moving automobile at Boito trade hub in Bomet.

He stated he was drinking with the two at the Litein trading center in Kericho County. They were meant to deliver him to his home in the Belgut constituency, but instead robbed him on the Litein-Mogosiek-Bomet highway. He said that when they arrived in Boito, the officer in charge of the car pulled over and grabbed the complainant's hands.

"Meanwhile, the lady stole Sh500,000 from the complainant's hand, tossed him out of the vehicle, and drove away," according to a police statement on the incident as described by Mr Ngeno.

Mr Ngeno informed the police that boda boda riders rescued him and took him home after the incident.

Police arrested the woman, but she was later released after it was discovered that the male had lied to authorities.

Police were perplexed as to why Mr Ngeno was taken home after being rescued rather than reporting the incident to the nearest police station.

Mr. Ngeno also had no injuries consistent with being thrown from a moving vehicle. 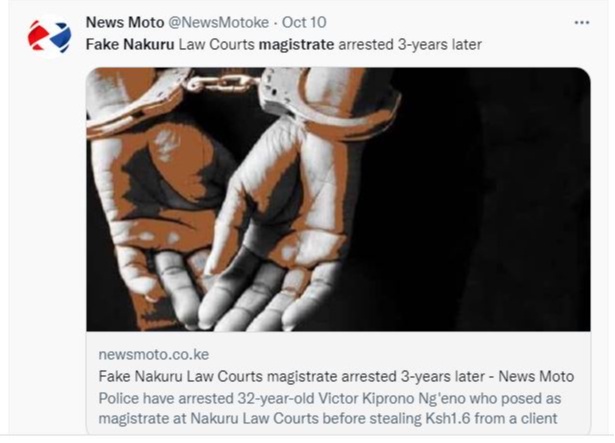 Even though he claimed to be a magistrate — a legal expert – the incident was reported to the police station at 11 a.m. the next day, 22 hours after the purported incident.

"While imbibing in clubs, the man is always in the company of senior government officers and the police. We had no reason to believe he was impersonating someone. "He's such a generous man," a waiter at a Litein pub said.

He eluded a police dragnet at a bar in Bomet late last year when he drove away just minutes before cops came in to arrest him for an unspecified offense.

“It is not possible that he has been working alone as he is well known and is treated well in social places because we all know him to be a magistrate. We were shocked when it emerged that he has all along managed to fool all of us,” a Bomet town resident, Kibet Tonu, stated.

Posing as a brother of a CS

Mr Ngeno is accused of acting as the brother of Devolution Cabinet Secretary Charles Keter and was arrested on Saturday in a sting operation by detectives from the Directorate of Criminal Investigations (DCI).

A complainant in the case, Samuel Soi, claimed that Mr Ngeno defrauded him of Sh1.6 million after promising to get jobs for his children at Kenya Pipeline Company. He also stated that he paid him Sh100,000 separately after he promised to speed up a court matter.

Reports indicate that Soi’s lawyers, Kipkoech Ng’etich and Clement Koigi, were piling pressure on the police to arrest the suspect. 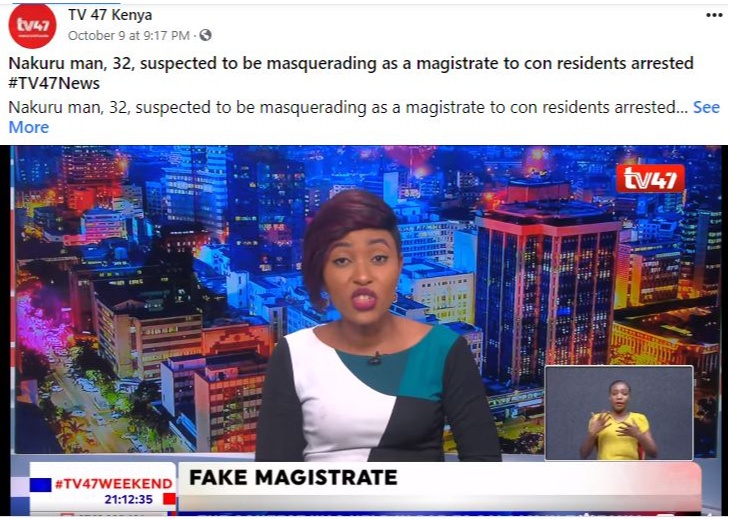 According to Anthony Sunguti, who is in head of the Nakuru County DCI office, the crime was perpetrated between 2018 and 2019.

While claiming to be recruiting court clerks, he is also accused of having many fraudulent letters from the Judicial Service Commission in his hands.

On behalf of Soi, Kipkoech and Koigi filed a letter to the Directorate of Criminal Investigations in Nakuru on March 3, 2021 requesting that Ngeno be investigated.

Soi stated in the letter that he had reported the incident to the Nakuru Central Police Station.

He stated the suspect told him he was selling a piece of land in Njoro and that he could help him find work for his children.

"Our customer paid the said Victor Kiprono alias Victor Keter Sh700,000 in M-Pesa for the land acquisition, and Sh900,000 in cash for the employment opportunities. When he paid the amount, a witness was there," stated part of the letter.

Promising victim to rule in their favour

According to a tweet from the Directorate of Criminal Investigations (DCI), Ng'eno (acting as a court officer) took Sh1,664,230 from an unsuspecting victim after fraudulently promising to decide in their favor.

“When he enquired about the ‘magistrate' at the courts, he was told that no one with Ng'eno's name and description had ever served as a judicial officer anywhere in the county,” according to DCI. 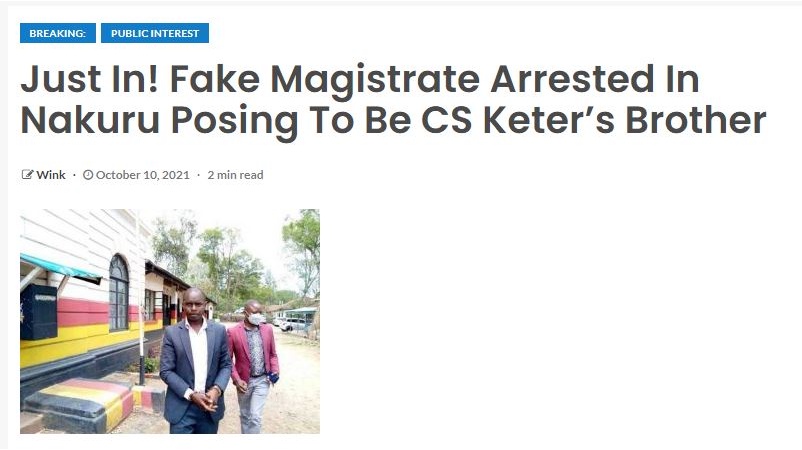 The victim subsequently reported the incident to the Nakuru Police Station, and the search for the suspect began.

He had vanished by that time, only to reappearance recently in his old deceitful methods.

Being held by police

Ngeno is being held for arraignment on Tuesday, according to Nakuru County Criminal Investigations Officer Anthony Sunguti.

"The suspect has been on the run for quite some time." Sunguti stated. "He is suspected of cheating the people."

Mr Ng'eno's case has now left Kenyans puzzled on how the man managed to do all that while he was in the compny of senior state officials. Was he being protected and later sharing his catch?