By Mzitonews (self media writer) | 2 months ago

Police in Machakos have arrested a 30-year-old man said to be the mastermind behind the gruesome attack of dead bodies at Yatta Funeral Home hearses. 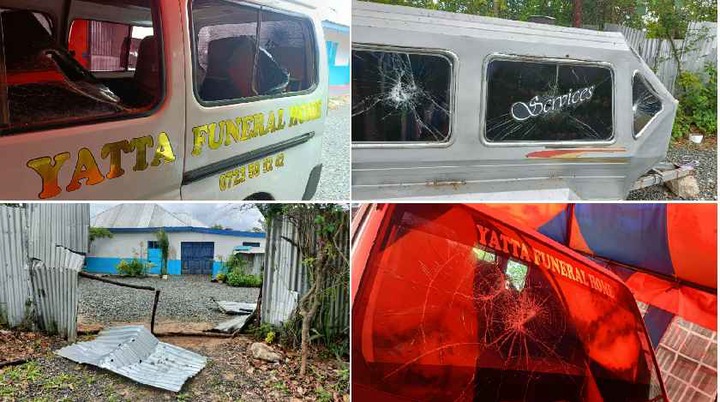 Confirming the arrest, Yatta sub-County Police Commander Bernard Rono says that the suspect is the son of the owner of the land where the morgue seats on.

On Monday, November 28 morning, residents woke to the shocking news that a gang had broken into the morgue, stabbed dead bodies before destroying hearses at the facility

After the incident, the morgue owner Gideon Mule told journalists that the land owner alongside his family had hired goons who were responsible of the act.

Mule says that the owner wants him to vacate the premises without paying him KSh7 million as ordered by the court.

"He wants me to vacate yet the court was clear he should pay me KSh7 million in order for me to move. Now he has seen the courts are against him he has reported threats and attacks.

"The hearse windows are broken none of them can be used until they are repaired. One body was destroyed completely even the family is here worried," he added.

Mule further says that the landowner had threatened to kill him on Sunday, November 27 just hours to the attack.

"Last night he was looking for me to kill me but I did not avail myself because of the crude weapons he was carrying together with his sons and wife," he says.

Content created and supplied by: Mzitonews (via Opera News )