Dr Shakil Afaridi is a man who might end up dying in jail after being sentenced to over 33 years in jail by the government of the republic of Pakistan after he allegedly snitched or rather betrayed the government of Pakistan by showing American CIAs where one of the deadliest terrorist known as Osama lived.

In his own words, he said that despite the fact that the man's doing might be considered as one of the greatest mission ever especially after the 911 tragedy where two of the tallest buildings were brought down by hijackers believed to have been directed by Osama, on Pakistan the man is nothing more than a useless unworthy man.

According to the reports given by the USA ambassador in Pakistan, he said that the suspect who know spends his lonely time in confinement was immediately arrested by the government of the republic of Pakistan after the successful mission where Osama Binladen was killed.

He would later be taken to jail where he lives or rather stays away from all the other inmates because according to the reports given by the government of Pakistan, the suspect who also spends his alleged last days in jail was given a Quran which he often reads on his own without being spoken to by any other person including the jail officers.

In conclusion, the man who is doctor by profession os said to have taken American CIAs to Osamas hide out where he pretended to be supplying goods to the starving terrorist and immediately after Osama was murdered, the man was Jailed in order to act as an example to all Pakistan citizens on what would happen to them if they snitch.

This incident has sparked alot of mixed reactions from Kenyans who seemed to have been confused on why the United States of America didn't rescue the man. With a section of Kenyans claiming that maybe this was because of the fact that they didn't have any jurisdiction in Pakistan, others went ahead and congratulated the man for making sure Osamas victim received justice. 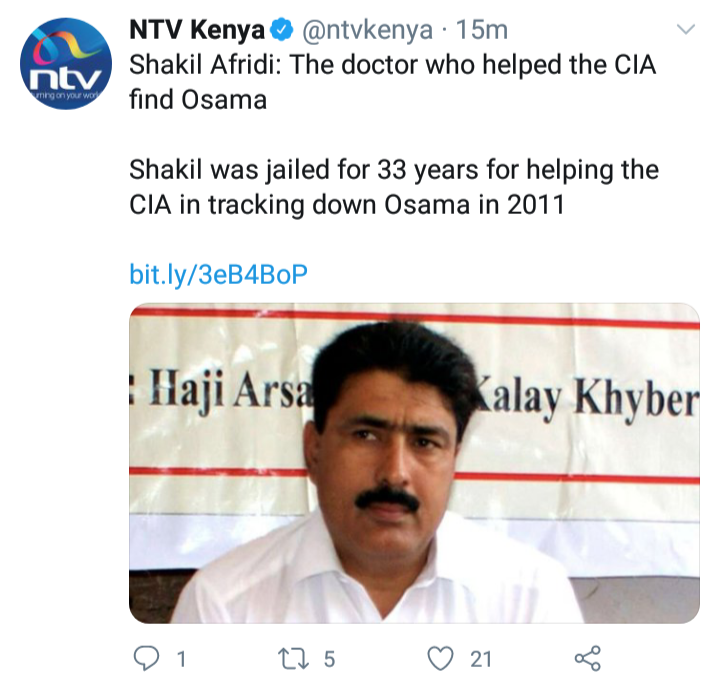 Israelis Should Understand The Bible And The Spiritual Warfare.

US Large-scale Paratrooper Drills in Estonia