By Katcyn (self media writer) | 1 month ago

There are traditions in every tribe most especially when a person dies. This traditions are done because of specific Reasons most especially if the person died unjustly by getting killed. An old man has however put a burial on standstill after he tried to sneak two eggs into a coffin that was going to be buried.

This action has made a lot of people question his intentions and if he had anything to do with the death of the person that is going to be buried. This was posted by tuko on their Facebook page. 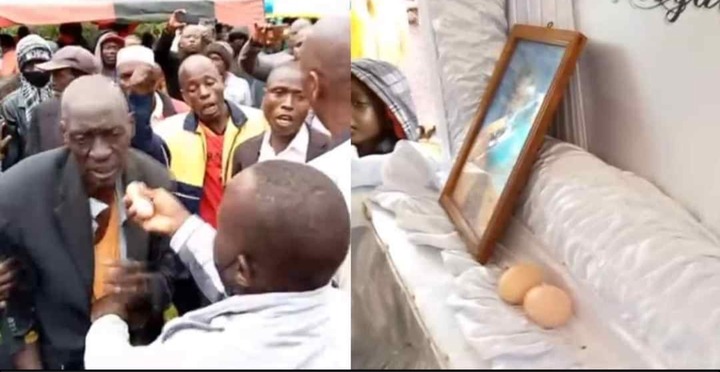 On their post they wrote, "A funeral in Kakamega was brought to a standstill after a 60-year-old man was caught sneaking two eggs inside the coffin. The man had placed one egg on the left side of the deceased and another one on the head when he was caught.

The angry mourners turned on him demanding an explanation. Community elders believe the man placed the eggs in the coffin to avoid the dead woman's spirits from tormenting him because he may have been involved in her death"

Here are some of the comments:

John: Perhaps he was wanted the corpse to deliver those eggs to Jehova Wanyonyi who went to be with himself.

Essy: God was tired with his evil deeds that's why he exposed him for it to come to an end

Jerry: As Long as we have luhyas around it's not a dull day in our country..Drama after Drama,😂😂

Moses: Witchcraft is real, but I wish they could have used the inventions for helping humanity, we could be very far

Francis: But in Traditional Heritage people used to be burried with their belongings.Maybe the deceased used to be a chiken farmer ! Who knows.

Content created and supplied by: Katcyn (via Opera News )