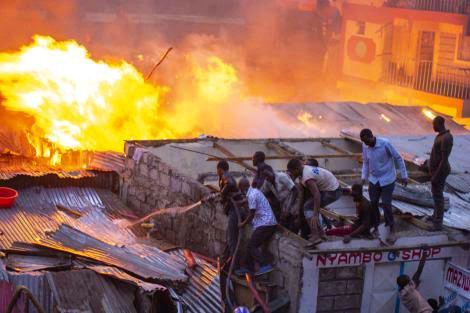 A blaze at Ojola House in the centre of Bondo town destroyed at least six floors on Monday night, as firefighters arrived ill-equipped to fight the blaze.

The fire started shortly before 8pm and by 9.30pm, there was little effort made to contain it since fire engines that rushed to the scene, were not properly equipped to reach the 5th and 6th floors which were damaged in the inferno.

According to the neighbours who witnessed the fire, a loud bang sounding like a gunshot was noticed at around 7.00 pm to seeing huge fumes of the smoke coming up from the building which was burning down already in flames.

“I thought they were gun shots coming from the neighbourhood, looking through the window I saw my neighbor trying to open the door while the smoke was covering up his house,” Ms Helen Koi, a neighbour. 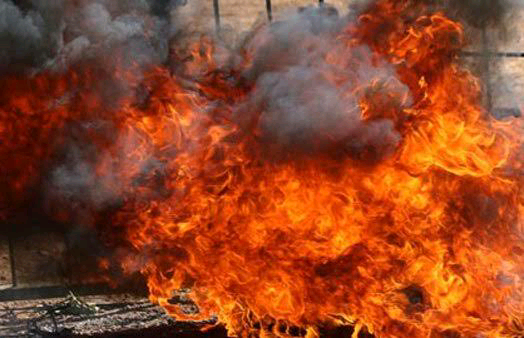 The 7.00 pm incident left Bondo residents with shock and in grief with some watching helplessly as millions of property burnt down to ashes.

Confirming the incident, Bondo sub-county police commander Eric Ochieng said on arrival at the scene, the whole building was on fire and no casualties was reported.

“It was after putting off the fire that we found out there was no one in the rooms who, we believe might have succumbed to death because of the bizarre incident,” said Eric.

Eric is also business man and owns a hotel on the 1st floor of the building noted that two hours after the blaze started, electricity supply had not been cut off, frustrating firefighters’ efforts. 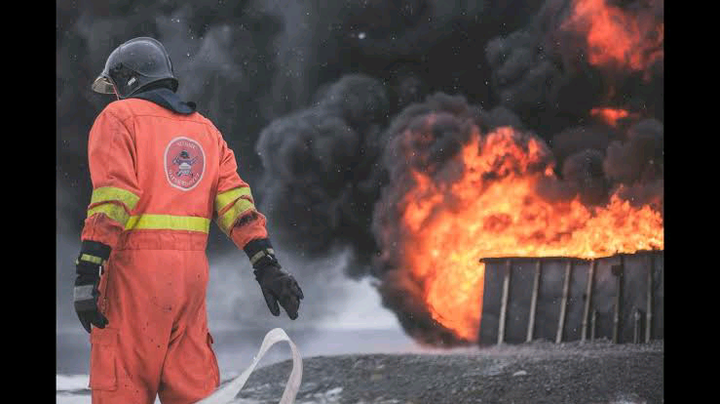 Residents of the town at the scene took issue with Bondo sub-county officials due to the slow response by their firefighters.

“This officers are just useless. They came here late, there were not effective, their water was not reaching even the 4th floor, if it were not for the private firms, this building would have completely burnt down,” eye witnesses.

However due to high incidents of fire breakouts in the county, Eric has warned members of the town to be cautious of all the sources of the fire and in case of any incident they should contact the fire office immediately.

The fire was under control by 10.00 pm after the firefighters worked for four hours to put out the hot flames and roofs while monitoring for safety.

The cause of the fire has not yet been established.Kenya Red Cross have cordoned off the area amid rescue efforts .