Three people perished on Saturday afternoon following a grisly traffic accident that occurred at Ngata area along the Nakuru-Eldoret highway.

Another 14 people were critically injured during the 3pm incident which occurred after a lorry rammed into a matatu.

The lorry was heading to Eldoret town while the matatu was travelling to Nakuru.

Preliminary investigations indicate that the lorry driver was following two other lorries from behind at high speed before he lost control of the lorry and crossed to the side of the matatu where he rammed into it head on.

The three victims, students at Rift Valley Institute of Science and Technology, died on the spot. The injured were rushed to the local hospital for treatment.

Area police boss said police have launched investigations into the accident he termed as horror. He said many of the accidents along the highway are caused by speeding among other factors which can be avoided. 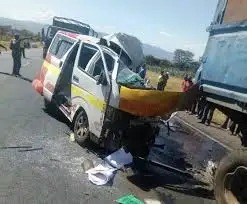 Residents pleaded with Kenya National Highways Authority (KeNHA) to erect bumps along the section of the road as several accidents have happened there.