By Willis.com (self media writer) | 7 months ago 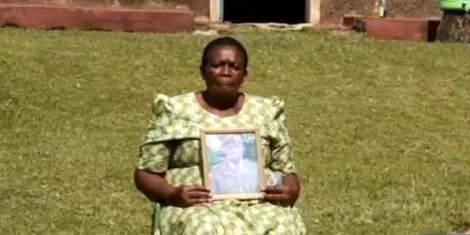 The family of a missing police officer attached to the General Service Unit (GSU) headquarters in Ruaraka, Nairobi, has appealed to President Uhuru Kenyatta to intervene in order to help them trace their kin.

Joseph Otieno, who is in charge of armoury within the camp, was last traced at around 11pm on July 9, 2021. He has been missing for approximately six months.

The officer's mother, Jane Otieno, made a passionate appeal to Uhuru- seeking to find her son at whatever cost.

The father, Antipa Otieno, noted that the government had taken a lackadaisical approach to the investigations.

"Please assist us through the government machinery to trace where our fifth born son is," the father passionately appealed.

The family noted that they would conduct burial rites without his body if all efforts failed to bear fruits in the coming days.

According to reports from detectives privy to the matter, Otieno's phone signals were last traced at a supermarket in Ruaraka along Outer Ring Road at around 11.13 pm the same day he went missing.

"Efforts to trace him have been in vain since his phone was switched off and whereabouts unknown. His phone signal was last tracked to a supermarket in Ruaraka," a report from the Occurrence Book (OB) read.

She noted that she lost touch with her 36-year-old husband at around 11:13 pm on the day he disappeared.

Days later, a car reportedly hired by the officer was found abandoned in Mwiki, Kasarani. Crime Scene investigators immediately conducted forensic analysis on the vehicle, searching for clues on fingerprints and DNA leads in the case.

A notice was issued to all police stations in Nairobi directing officers to keep an eye on the developments and assist where necessary.

The missing officer's report comes against the backdrop of increasing kidnapping cases countrywide. In Nairobi, police are still searching for clues to unravel the mystery of missing officers.

From former Kenya Air Force officer and security expert, Mwenda Mbijiwe, to a recent GSU recruit who went missing shortly after graduating, a number of cases have caught the country's attention.