By Dailybrefingnews (self meida writer) | 24 days 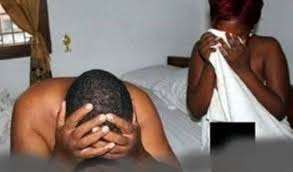 A form four student at School in Olenguruone, Nakuru county has succumbed to injurie inflicted on him using a sword by a man, Japheth Bii who caught them Redhanded on their matrimonial bed.

It is reported that the woman lured the young teenage after her husband had gone for a visit. It is said the the husband coming back was unexpectedly as the woman had not thought that this could happen.

It is reported that the husband was given an alarm by his spie which forced him to overturn his planned meeting. In reaching the house, he was shocked after he caught a young teenage who was a form four student on top of his wife. Making it more worse they were practising the habit on their matrimonial home with was seen as a bad omen. This angered the man and forced him to take actions in his hand as he used piercing object to attack the man leaving him with several injuries. The young boy was later taken to hospital to get treatment.

Wishes Of Angry Man after His Two wives leave him