By Enmulatya (self media writer) | 4 months ago 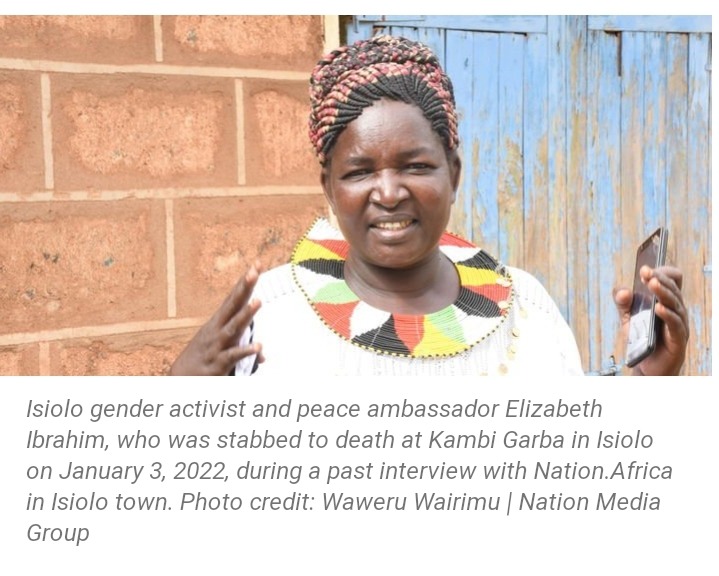 Elizabeth Ibrahim,who is Isiolo gender activist and peace ambassador met her unfortunate death on January 3, 2022, at Kambi Garba in Isiolo.

The late, a mother of five was stubbed over a land dispute, Patrick Nawit being the key suspect of the murder. Nawit was rescued by the police from the angry mob who injured him badly and is currently admitted at the Isiolo Referral Hospital, under critical condition, with police officers watching.

There is no clarity of where the incidence happened as some reports indicate Ibrahim was attacked at a funeral while the police say she was attacked as the two were walking along the road.

Sadly Elizabeth was killed around the same area where her husband and son were killed 11 years ago during a clash between two disputing communities after the house they were hiding in was set on fire.

Isiolo leaders including the Isiolo county women representative Rehema Jaldesa and nominated MCA Mumina Konso have condemned the incidence. They praised Elizabeth as selfless and devoted and called upon the police to ensure the bereaved family has received justice.

Content created and supplied by: Enmulatya (via Opera News )

"Don't Block Them." Mixed Reactions After Nyoks Wa Katta Wrote This on FB

OPINION: Kalonzo Musyoka Is Committing Political Suicide By Deciding To Vie For The Presidency

"Not Everyone Can Afford" Akothee Blasted For Trolling People Not Using The Express Way In Nairobi.