By Soccer,AthletesNews.com (self media writer) | 5 months ago 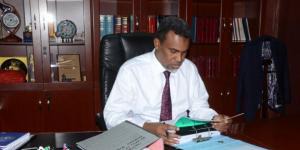 A police sergeant in Mombasa County will on Thursday, August 26, face murder charges for the killing of a secondary school student who was shot dead at Uwanja wa Mbuzi, Kongowea, in Mombasa County five years ago.

Sergeant John Otieno will face the charges following the approval by Director of Public Prosecutions (DPP) Noordin Haji to have the sergeant answer to the killing of Tony Katana, who was a 16-year-old Form Two student at the time of his death.

The deceased, who attended Havards Secondary School at the time of his murder, was discovered and identified by his family members at the Coast General Hospital Mortuary where his body had been preserved.

Sergeant John Otieno who was attached to Nyali police station in Mombasa County is accused of killing a 16-year-old student on August 12, 2016.

Investigation into the murder, which was done by the Independent Policing Oversight Authority (IPOA), found Otieno had a case to answer and recommended murder charges be brought on the sergeant.

"The student died of bullet injuries inflicted during an encounter with a police at "Uwanja wa Mbuzi," stated the statement by IPOA dated August 26.

The student was killed in a shooting witnessed by area residents, police officers who were on patrol duties, and some of the friends of the deceased.

Upon review of the evidence presented by IPOA, the DPP approved the recommendation to charge the accused officer for murder, according to a statement.

“IPOA forwarded the investigation file to the Office of Director of Public Prosecution with recommendations to charge Sargent John Otieno with murder, contrary to Section 203 as read with Section 204 of the Penal Code.

“The ODPP, after independently reviewing the evidence therein, concurred with the recommendations of the Authority, and the officer is scheduled to take plea the High Court in Mombasa today, August 26, 2021,” stated IPOA Chair Anne Makori in a statement dated August 26.

Police have been under sharp scrutiny in recent times, following the brutal deaths of civilians in the hands of police officers on duty.

Recent killings include the death of the Kianjokoma brothers in Embu and the death of a 38-year-old boda boda rider who reportedly died at the hands of police officers after being arrested for violating the dusk to dawn curfew.

Police are also under fire following the murder of two people who were shot dead in Nairobi's Kahawa West area on Wednesday, August 25, during a demonstration by traders who were protesting the demolition of their stalls by the county government.