Panic and Grief as Two Die in Mysterious Incidents in Kakamega 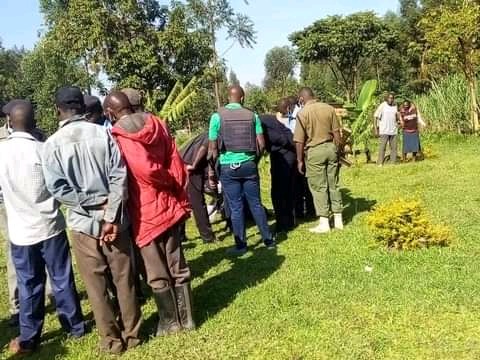 Residents and security personnel at the home of the late Peter.

Residents of Malava in Kakamega County were left in shock and grief after discovering bodies of two people lying in different areas on Monday. The two incidents are said to have happened under unclear circumstances.

In the first incident, a 54-year-old man's body was found lying at his compound in Shamberere, Kabras South.

The man, identified as Peter was a security guard at Kakunga Primary School near Kambi ya Mwanza market.

His daughter who spoke to Citizen Tv said they received a call informing them that their father was ill but before they could make their way home, there was another call that informed them that he had succumbed.

"We just received a call that our father was sick but while we were on the way home, we received another call that he had passed on," the daughter said.

She added, “When we arrived, we found him already dead. We don't what transpired leading to his death, whether it was a fight or not."

It was also reported that the man used to live with the son who engaged him in frequent fights.

"The late mzee lived with the son after the wife left him. We suspect that the son might have hit him leading to his death," one resident told the writer.

In the second case, the body of a standard 7 pupil at Ingavira primary school was found on the road near the school.

The victim left their home on Friday to visit his step-grandmother and was expected to return on Sunday. His return to home didn't materialize.

"My child left home to visit his younger step-grandmother on Friday. Since then I haven't seen him. I thought he was still there," the mother said, indicating that she received a call that her son's body was at the roadside.

A resident who spoke to the writer on point of anonymity said that the boy hired a motorbike on the said day and might have made agreement with the owner to return it with payment according daily charges. It was rumoured that the victim did fulfill the agreement prompting the motorbike owner to stab him with a knife.