The National Police Service has been a shining beacon of what a force is to the people and due to this, there have been benchmarking sessions by other countries in Kenya.

The August General Elections has been here with us but they have not been without incident despite the fact that they have been termed as free and fair by most Kenyans.

As most Kenyans wait for the Presidential results to be released to the public, a curious case has caught the eye of Kenyans where a police officer put his life on the line to save a woman from an unruly mob in Busia County.

According to the available reliable reports from the Official Social Media Handle of the National Police Service, a woman at Mwari Polling Station in Busia County was assaulted by a number of youths before a senior police officer stepped in.

The National Police Service has called for calm and peace as well as toleration in this election period so that no harm should come to any Kenyan.

The Sub-County Police Commander of Teso North, one Mr. David Muange SP had to intervene to save a woman's life who was being manhandled by unruly youth near the Mwari Primary School Polling Station that is found in Busia County.

Here is the police statement, "The police service has condemned such acts of violence as well as Gender Based Violence Against Women from all walks of life in Politics. We will always strive to be on guard in the fight against gender based violence especially in this season of highly charged elective politics." 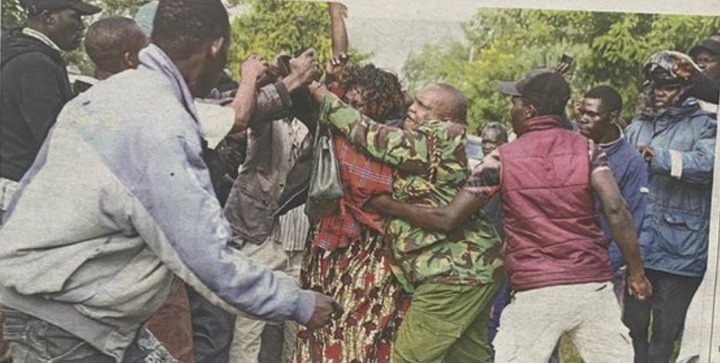 Picture courtesy. Image from the incident that happened in Busia County at Mwari Primary Polling Station.