By BillShamz (self meida writer) | 1 months 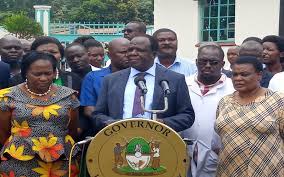 The Kakamega County Government has unveiled an ambitious housing project that will cost Ksh. 6 Billion.

Governor Wycliffe Oparanya said the housing project, which starts next month, was meant to offer decent shelter for the county staff and other residents.

Dr. Oparanya said the county government planned to construct 4,000 modern storey houses in Kakamega and Mumias towns under the project.

He said the houses would then be sold to staff and other interested people.

"We have already identified a developer who will bring in a contractor to set up 3,000 houses in the first phase of the housing scheme," said Oparanya.

He added that a contract for construction of another 1,000 houses in the second phase would be given to the private sector.

Speaking to the press in his chambers in Kakamega town this afternoon, Oparanya announced that the old county houses at Otiende and Amalemba estates in Kakamega town would be demolished to pave way for construction of the new houses.

He pointed out that the county had already issued a vacate notice to occupants of the houses in the two estates.

The governor said occupants of the the government houses that would be demolished would be given priority in allocation of new houses once the project is complete.

He called on the tenants to cooperate and vacate the houses to enable the project to commence.

The governor stated that the project is expected to be completed in nine months.

"We are going to use modern technology so that the project can be completed within eight to nine months," he added.

He pointed out that staff from the national government, county or any other organisations, would be eligible to purchase the houses that will cost between Ksh. 1 Million to Ksh. 3 Million.

He said that the administration would not discriminate against any member of staff in the exercise.

He said staff would be required to pay 20 per cent of the required price for the house then the balance deducted from their payslips.

"This will be some of the retirement benefits for staff. I, thus, urge them to save money and buy the houses," he said.

The governor added that the project would change the face of the two towns besides resolving the housing shortage for staff and other residents.

He added that the housing scheme was in line with the agenda four of President Uhuru Kenyatta.

Oparanya said the project would help the county meet some of the requirements needed before it qualifies for a city status.

He said the housing scheme would also help Kakamega and Mumias towns to get rid of slums.

Do You Still Remember The Boy Who Trekked For 50Km, Good New Emerge As Well-wishers Did This To Him

5 Significant Changes That May Make The World Unrecognized In Future