By Summary (self media writer) | 4 months ago

The Brother to the suspected killer Cop Caroline Kangogo defended her sister of murder allegations surrounding her last days on earth.

Speaking during her burial in Nyawa village in Elgeyo Marakwet, Mark Kangogo said what has been written and said about their sister is not true since the DCI is yet to confirm whether she is the one who killed the two people.

According to Mark, her sister remains innocent until investigations conclude that she indeed killed her colleague and lover John Ogweno before committing a similar offence on businessman Peter Ndwiga. 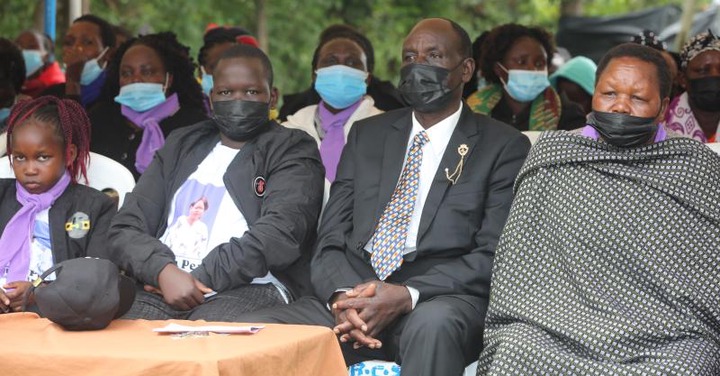 Mark at the same time said if the murder incidents were committed by their sister as reported by the media, then it could have been by mistake.

“A lot of things have been said about our sister. The things you have heard and read in the media about Caroline is not what we know. If My sister did anything wrong then it was by mistake. The DCI has not confirmed whether she killed anyone or not. They will tell us when they complete investigations,” Mark told mourners.

According to Mark, Caroline Kangogo was a humble girl who was loved not by her family but also by members of the community.

He said she was a regular churchgoer who they believe couldn’t have done what is reported about her.

“She was full of humility and her presence here made us happy,” he added.

Kangogo was laid to rest at her parents’ home in Nyawa village Elgeyo Marakwet County.

Her estranged husband Richard Ng’eno and two children were also present during the burial.

The husband, however, refused to speak at the funeral despite having been asked to address mourners.

Her burial comes after her body was discovered in the bathroom in her father’s compound the same place she was buried.

It is her mother who discovered the body and later alerted relatives and neighbours.