By TheeWriter (self media writer) | 28 days ago 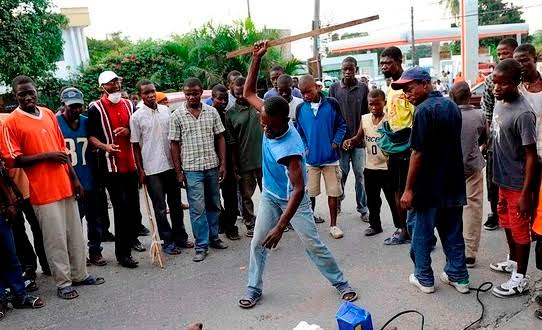 A young man in Eldoret town escaped death by whisker after he was found guilty of stealing from his employer. The man is believed to have been send to deposit the said amount of money to his employer's M-pesa but he decided to escape with it.

The woman who is his employee decided to alert his two sons who were in school(ETTI) to go after the thief. The lady decided to do so after waiting for long without seeing any sign of the young man coming back.

It happened by coincedence that the younger son of the mother was the one to arrive first and came into contact with the thief.They believed that the thief will first arrive at the bus stage and that is where they started searching for him.

They met at Kangaroo shuttle stage but the young man was not forgiven for his mistakes. He was beaten roughly and his clothes torn apart. He pleaded for mercy and they stopped beating him.

Some onlookers believed that the man did not still willingly and may be he had some problems or they might not be paying him well. At the time when he was caught, he had already used KSH.300.

My husband Is Cheating On Me With My Best Friend, Should I Confrot Him?