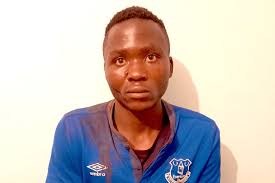 New details have emerged on how self confessed serial killer Masten Wanjalla escaped from Jogoo Road police station. It has been established that Mastern Wanjala escaped after he learnt that there were curfew offenders who would be arrested and released after paying money.

The late Mastern Wanjala was killed by a mob justice in Bungoma County after being spotted by a bodaboda rider. Just a few kilometers away was his ancestral home and his father expressed the pain that he had was feeling after the demise of his son Mastern Wanjala.