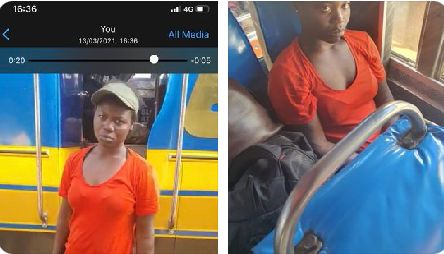 The overwhelming outcry of the public over the photos and video clips that went viral on social media of a young woman who was a house helper brutalizing two minors who belonged to her former employer, forced police detectives to act and in this afternoon arrested the lady.

DCI said that their attention was also drawn by the mother of the two kids who was seen appealing to the for any information on her whereabouts and be arrested if found. The two boys who are aged 5 years and 11 years old are currently hospitalized and are undergoing treatment. Their condition is said to be very critical.

They are nursing the severe stabs and injuries that left them with wounds. When the mother made the public outcry she was joined by friends and well wishers who wanted to see the house maid arrested for brutalizing the innocent kids. They asked for anyone who had vital information about the whereabouts of the woman and fortunately the detectives nabbed her today.

The heart-breaking appeal was made by them while they were on hospital beds where the two boys were heavily bandaged undergoing treatment. However, the criminal has now been arrested and is in police custody. The detectives swung into action since last night and after a long pursuit she was arrested by city-based detectives.

They arrested her at Eldoret trying to sneak out of the country to a the neighbouring state using a Busia-bound bus. She is believed to have some relatives or roots there.

The suspect was found to be in possession of two Kenyan identification cards. She assaulted the two minors and they are now in a city hospital to regain their health and save their lives. The reason for assaulting the two minors was after she had disagreements with the employer and forced out of the house to end her contract.

Instead of taking the orders to leave the house after being sacked she crept back into the same house without being noticed and did the criminal act in the absence of the parents. It was revenge act. The public revealed her whereabouts which finally led to her arrest. They provided the crucial information to the detectives and she was arrested before she could sneak out of the country. The DCI thanked the public and the Eldoret Express Bus who cooperated to provide the information. They were on hot pursuit of the suspect and the lady is now arrested. 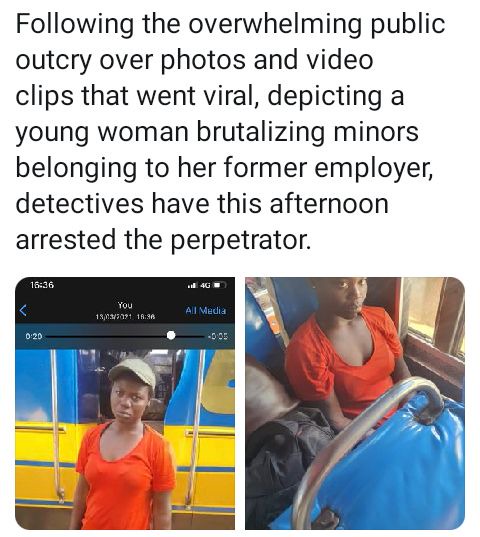 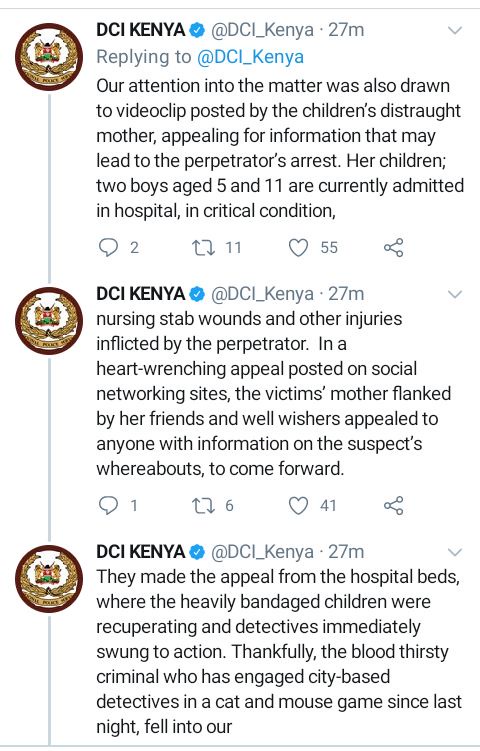 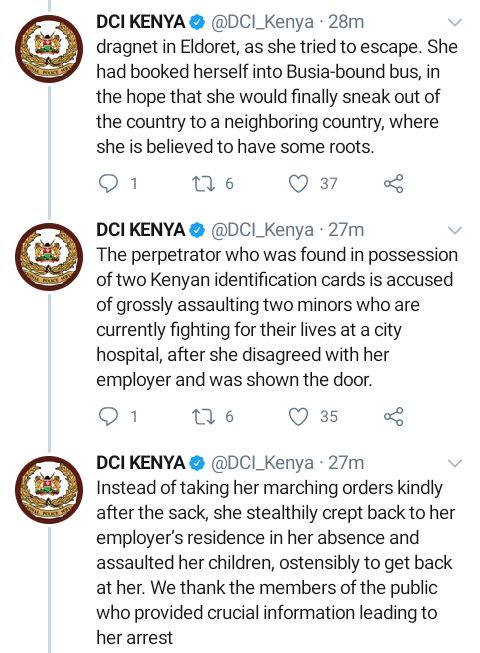 Joy In UDA As The Latest Opinion Poll Alleges They Will Win All Top Seats In Meru County.