By 254SportsAnalystGoddy (self media writer) | 23 days ago

With a collective length of 68.3 kilometres, the 10 sections are considered the deadliest on Kenyan roads, accounting for up to 22 percent of an average of 3,000 people killed annually in road accidents, according to official data.

Despite disruption to travel caused by a ban on movement imposed in some counties due to the Covid-19 pandemic, 3,508 have died in road crashes in the last 11 months, and the deaths have occurred at some of these spots. The 10 are identified in a government report released in March 2020 following the survey done from March 4 to 8, 2019. 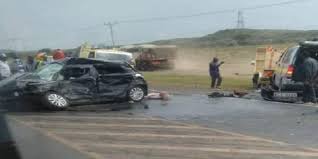 On the Nairobi-Nakuru highway, the Karai stretch at Laini trading centre in Naivasha is among the most notorious.

The area claimed 40 lives on December 11, 2016, but many more have died in other accidents. Naivasha Sub-county Police Commander Samuel Waweru said that alongside Kinungi and Delamere, Karai is a notorious black spot.

On October 18, three people died and six others were seriously injured after a vehicle they were traveling in rolled several times in Karai. In the same month, a policeman died after his motorcycle collided with a matatu at Karura area on the Naivasha-Gilgil highway.

Another police rider sustained minor injuries during the incident. On the Sobea-Salgaa-Sachangwan-Kibunja stretch, 10 people have died this year. But Sachangwan resident Ms Mary Wangare says the road crashes at the stretch have reduced.

"It has been quite a while since we had accidents along this road. We actually thank God for the transformation that has saved many lives," she says.

Police records show that over 150 people have died along the stretch between 2017 and 2019.

The numbers however reduced in 2018 to 23 accidents and 22 deaths. Between January and December 2019, there were 21 accidents and 19 deaths. This year, there were 14 accidents and 10 deaths. An NTSA study along the stretch revealed that major contributors to the accidents were heavy traffic, speeding and careless driving.

In Uasin Gishu County, Sukunanga town has become notorious for fatal road accidents. In 2018, prominent Eldoret businessman died after his vehicle hit a culvert while trying to overtake a lorry.

Local police blame the accidents on careless and drink driving and lack of visible signs. They have asked the Kenya National Highways Authority to put up visible signs in the area.

Due to the many accidents on the stretch which extends to Burnt Forest, the government is planning to construct an accident emergency unit near Kapkoi between Bayiete and Kerita. The unit, meant to decongest Moi Teaching and Referral Hospital (MTRH), will have 10 high dependency unit (HDU) beds, a theatre and two ambulances round the clock.

In Kakamega, Kaburengu Junction and Eninja corner have caused a lot of misery to hundreds of families over the years. In July, a lorry lost its brakes and run over several traders in Kaburengu Junction, killing 10 people instantly. Residents have blamed delays in completion of a flyover on the increase in accidents.

Mr Harrison Wafula, a local boda boda rider, said he has witnessed more than 20 accidents at the junction this year.

"We have a group of youths from Chimoi, Lwandeti and Nabuyole who also attack vehicles at night and cut pressure pumps before robbing them," Mr Wafula added. Bungoma East base commander Rodgers Lwembe has called on drivers ascending the Chimoi slope heading to Kaburengu to be cautious.

The high traffic of sugarcane tractors owned by sugar millers has become a catalyst for road accidents at Kambi ya Mwanza, also in Kakamega County. The erection of speed bumps has not curbed the deadly crashes.

At Makunga, the road is steep with a sharp bend leading to River Sasala and speeding motorists end up plunging into the river. Drivers also struggle with a similar steep slope at Ejinja.

There are no road signs warning motorists on condition of the road. Other notorious killer spots are Tanga Kona and Matayos on the Mumias-Busia road.

The 3.2-kilometre stretch between Kakrao trading centre and Migori town has joined the list of the most dangerous roads.

The narrow stretch leading to Migori town is busy due to the high number of trucks transporting goods to the border town. Seven riders were killed at the spot in road crashes in November while five others have lost their lives this month.

In the latest incident, a truck driver lost control and ran over a boda boda rider and his two passengers who died on the spot.

On Thursday, three people died when their motorcycle crashed into a lorry. The rider and two female passengers died on the spot. Matafare junction about four kilometres from Rongo town is another black spot.

In July, a seven-year-old boy and his mother were run over by a speeding matatu as they attempted to cross the busy road.

Several road users have also died along the Sagana-Karatina road in Kirinyaga County, triggering protests. The Kangacho, Sagana Bridge and Kibirigwi areas are well known black spots. Recently, three members of the same family were killed when their car collided with a lorry at Kibirigwi.

He attributed the accidents to careless driving.

Meanwhile in the Nithi Valley in Tharaka Nithi County, at least one grisly accident is witnessed every week, according to the devolved unit's rescue manager Alex Mugambi.

He said most of the accidents involve trucks whose brakes fail, and public service vehicles. A steep two-kilometre slope that ends at the Nithi River bridge is a major cause for concern.

The road generally has many corners. Heavy trucks often suffer brake failure in the area. In Isiolo, at least six people have died, with 14 seriously injured, following accidents in the last seven months. Four have suffered minor injuries.

The fatalities include three pedestrians, two passengers and one motor cycle rider, according to Isiolo Sub-county Police Commander George Kariuki.

Mr Kariuki counted the Isiolo International Airport junction, Isiolo town market opposite the stadium and the junction to the county offices among the black spots.

"Drivers have to be extremely careful as the boda bodas can join the main road from any side without even checking," he said, while also blaming pedestrians for not being vigilant while crossing the road.

Coast Regional NTSA manager Eva Mwangi said most highways are a nightmare especially when traffic volumes are high like during festive season.

The Kibarani-Changamwe stretch has also been a nightmare for motorists exiting or entering Mombasa Island, as is the Kwale - Matuga junction. Last week, four passengers died on the spot following an accident involving a matatu on the Mombasa-Malindi highway.

In March, a deadly road crash involving a lorry and a matatu killed 13 people at Shauri Moyo area on the same road.

Just in: Students of Top Boys High School in Nakuru County Walk Out of School