By TrueAnchor (self media writer) | 1 month ago 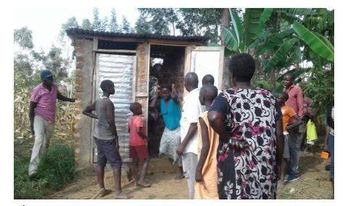 A teacher and his daughter are biding their time in a police cell in Teso south, after allegedly colluded to untimely terminate the life of a new born baby by throwing the child in a pit latrine.

According to reports, a villager heard a suspicious scream of a baby inside a 20-feet-deep pit latrine. On inquiry, he found it was a baby. He then raised alarm and irate villagers stormed the house of the said teacher and found him and the daughter relaxing, probably reflecting on their heinous act.

However, their act was thwarted and ended in premium tears after villagers descended on them mercilessly until they revealed what had transpired.

The villagers then rush to the latrine, broke one side, and save the child while still alive. The baby had been nicely wrapped in banana leaves and other warm materials.

The baby was taken to Lukolis dispensary before being transferred to Busia County Referral Hospital for further treatment.

The suspect, a daughter who is a second-year student at Kenya Medical Training College (KMTC), and the father were handed to Asing’e assistance chief Mr. William Inyaa. They were then arrested and taken to a nearby police station pending arraignment in court once investigations are done.

But it was later revealed that the two, father and daughter, had committed incest and they were trying to conceal the incestuous act since its a taboo in their culture.

Content created and supplied by: TrueAnchor (via Opera News )

Woman In Great Trouble After Being Spotted At The Slain Agnes Tirop's House, Police Are Tracking Her