By Mrs.dr.life (self media writer) | 2 months ago Three jailbirds who escaped Kamiti maximum prison were Rearrested yesterday which brought peace in Kenyans hearts. The three, Alex shikanda, Joseph Juma Othiambo and Mohammad Ali were arrested in Enzio forest in kitui county believed had been touring to somalia. This convicts were serving jail terms after being found guilty of terrorism.

This terror suspects escaped from a highly guarded prison and managed to manoeuvre their way out. They dislodged a wall bricks and used ropes made traditionally from their correction blankets to escape.

Later allegations come out saying that content creator Eddy Butita was involved in planning the prison break and giving out the ideas about the easiest way out. Edger obare posted this on his Instagram official page asking kenyans if they think the convicts and police wardens staged the the entire Kamiti escape and what might be the agenda. He added and asked Eddy Butita if he was involved in writting a script for them.

Eddy Butita replied saying that he was not involved in writting that one. He added that if he was the one who wrote it it would not have ended that way, but it would now be in episode two. 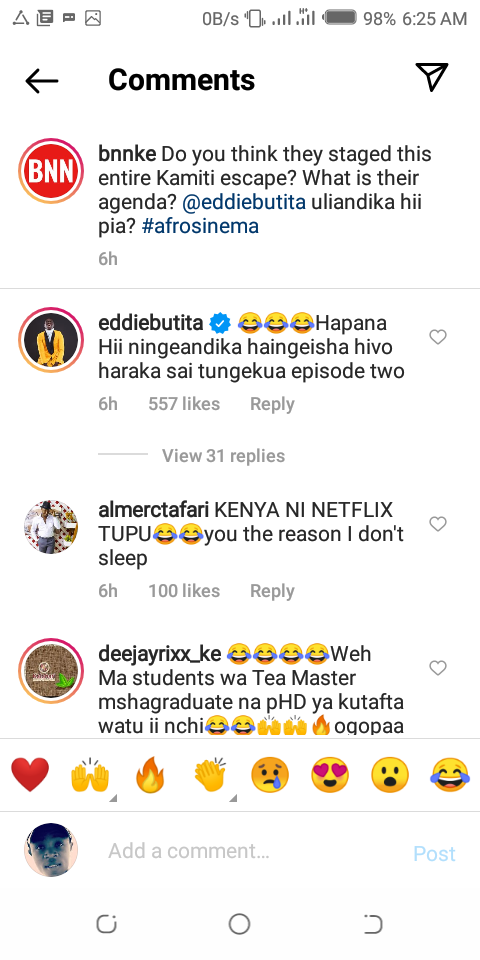 Big Win For Ruto, Big Blow For Raila As Mudavadi Pledges To Work With Ruto Ahead Of August Elections