According to a report from WITHIN NIGERIA, one Dorcas Chebet shot and killed her officer husband, Abel Andari who was aged 28 and afterwards, turned the gun to herself and allegedly killed herself. Dorcas Chebet was a 27- year- old Kenyan police constable at the time of the shooting.

According to preliminary investigations, the couple was discovered lying in pools of blood at their home at Kiungani Police Station in Kiminini, Trans Nzoia County, in what appears to be a murder- suicide.

It has been reported that Chebet and her husband arrived at the Kiungani station at approximately 10 a. m. on Sunday, January 23, where they met and immediately locked themselves in their home.

According to the Nation, Francis Kihara, the Trans Nzoia County Criminal Investigations Officer, stated, " Around 11. 30am, one gunshot was heard from the house of Mr Andari, " and that the incident occurred in the county.

Mr Kihara stated that the Station' s Commander (OCS) indicated that additional gunshots were heard coming from the house shortly after. He claimed that after the gunshots were heard, there was no more movement in the home. After that, the police busted through the closed door.

According to him, inside the residence, the two policemen' lifeless bodies were discovered sprawled on the floor. " There was a G3 rifle and three expended cartridges on the floor, which was discovered. According to preliminary investigations, Chebet shot Andari in the chest with the G3 rifle before shooting herself in the forehead with the same weapon later.

Before the gunshots were heard, neighbors reported the couple had barricaded themselves in Mr Andari' s residence with his one- year- old daughter. While Mr. Andari was suffering from a gunshot wound to the chest, Ms. Chebet was bleeding profusely from the top of her head.

Locals, who described Mr Andari as a silent man who rarely spoke, demanded that police officers receive psychological support in order to prevent such tragedies from occurring in the future. While speaking at the scene, Mr Jeremiah Njuguna called on the National Police Service to give psychiatrists to police personnel, whom he claimed were experiencing difficult times in the course of their duties.

This is the second instance in which a jail officer has committed suicide in Lessos. These are our brothers, and while they may be armed, they are also human beings who require assistance.

After being transferred to the Kitale Level Four mortuary for autopsy, the remains were separated from the used firearm and expended ammunition, which were taken away for forensic analysis.

In another news, Queen Beatrice, a housewife from the Okitipupa area of Ondo state, is said to have slain her husband Emmanuel lkukuni with a plank at their home. According to information obtained by Vanguard, the heinous crime took place in Omotosho in the Okitipupa council area of the state.

According to reports, the suspect beat her spouse after he received a phone call from another lady while she was present. A fight is reported to have erupted, during which the suspect is said to have hit her husband in the head with a plank.

According to sources, the husband had slumped and passed away before his neighbours could arrive to assist them. According to an eyewitness, " by the time the neighbours were able to rush the spouse to a local hospital, he had already passed away. " 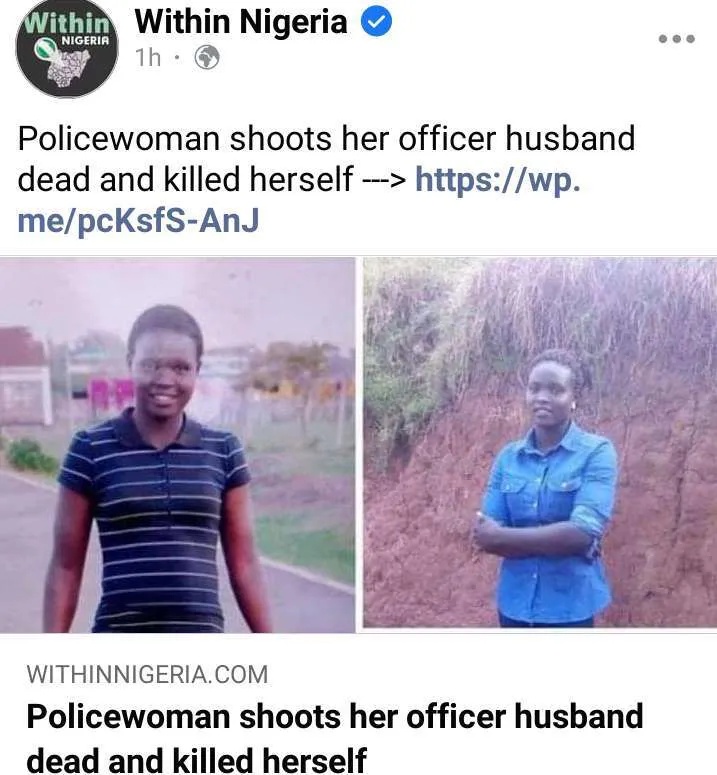 Speaking to reporters, Imoleayo Ikujuni, a sister of the dead, stated that the wife had confronted her late brother for phoning another lady in her presence while she was present. In the course of the battle, she struck him with a plank, and he died instantaneously. They have taken her into custody.

In order to conduct a thorough investigation, the suspect has been transported to the State Criminal Investigation and Intelligence Department (SCIID) in Akure. " According to a family member of the deceased, the body has been taken to the mortuary for autopsy examination.

Magistrate J. A. Adegun released the defendant on bail in the sum of N50, 000 with one surety in the same amount, according to the court record.

What' s your take on this unfortunate incident?