By The_Anchor (self media writer) | 1 year ago 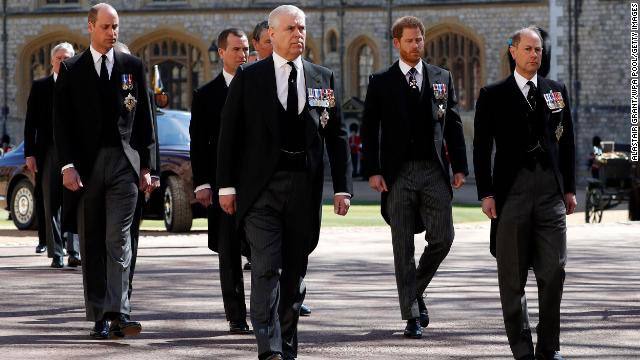 The funeral for Prince Philip, the late husband of Britain's Queen Elizabeth II, began with a procession. A Land Rover carried his coffin, followed on foot by his children, other members of the royal family and royal aides.

A somber and focused funeral service was held Saturday for Prince Philip, Duke of Edinburgh — a service that Philip himself had chosen, despite the COVID-19 protocols that meant only 30 people could attend. Queen Elizabeth sat alone at the service due to the virus.

Many of the funeral's personal touches were planned by Philip, including the music sung by a choir of just four people. He also designed the Land Rover that brought his coffin to St. George's Chapel on the grounds of Windsor Castle.

People across Britain held a moment of silence before the funeral, and the service reflected Philip's dedication to military service. His casket was draped with his military cap and sword, and military bands played tribute to him.

Prince Philip was interred in the Royal Vault at St. George's Chapel alongside the remains of other royals.

The funeral brought the Royal Family together in public for the first time in many months, with Prince Harry traveling from Los Angeles to attend. His wife, Meghan, watched from home. She is pregnant with the couple's second child and was advised by doctors not to travel.

Content created and supplied by: The_Anchor (via Opera News )

Provisional Presidential Results As At 6:08Pm

"Rigging In Daylight, Ballot Boxes Enter Through Back Door" Waiguru Calls IEBC To Inspect The Following