Isaac Ojwang, A Prison Warder Composes A Painful Message Before Taking His Life

By Fasihibrand (self media writer) | 4 months ago 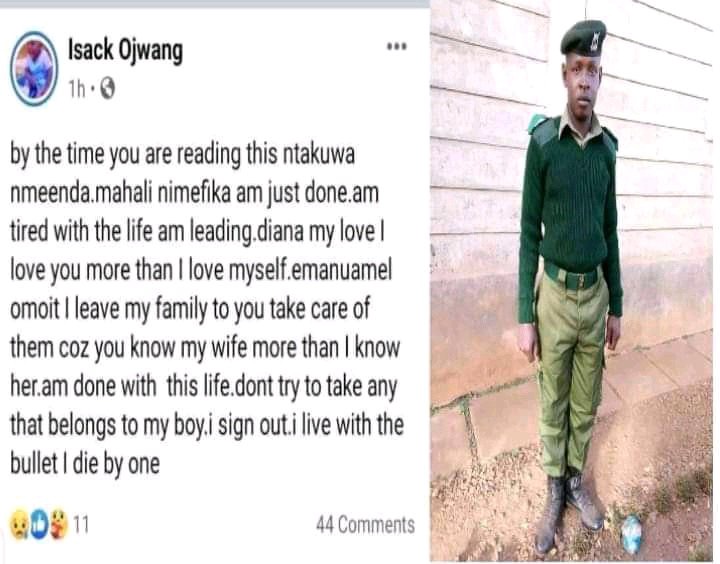 It is sad to announce that Isaac Ojwang a prison warder had been reported to have taken his own life after suffering from depression. The source said that the man took his own life after composition of a painful letter to his facebook account.

On his later Ojwang said that by the moment people are reading his message, he will be gone. He said that wherever he was, he is tired of living. He also headed to say that he loves his wife whom he referred to as Diana more than he loves himself. Along with that, he added that he leaves his family to Emmanuel Omoit who has been chewing his wife since. He said that Omoit knows his wife more than he knows her. He said that he is done with his life buy no one should take what belongs to his son. He further concluded that he lives with a bullet and he will end himself by it.

Those who interviewed his sisters and other acquaintances, they said that he had begun been alcoholic to deal with depression. However that did not help him much as depression was too much for him that it lead him taking his life.

It wasn't that he did that to harm himself but because of the acts his wife was doing. He took his time and effort to work and cater for his wife but who ended up being infidel to him. This was too much for Ojwang that he decided to end his life to escape from the depression he was battling with. It is so sad.

Ruto Speaks Amid Threats from Governor Joho, Alleges Why He Parted Ways With Raila (VIDEO)

Video:What The GSU Graduands Were Heard Saying In Viral Clip That Has Put Them In Hot Soup

Willis Raburu Opens Up On Fatherhood Journey, Reveals 3 Reasons Why It's Been So Successful For Him