By TheKamams (self media writer) | 8 months ago 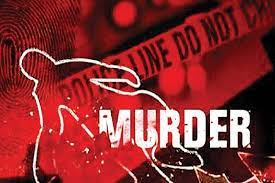 A bizarre incidence was witnessed at Embakasi constituency when two lovwerbirds engaged into quarrel leading to stabbing of one.

according to Directirate of Criminal Investigatio, one Henry Mburu Njeri was killed at a house belonging to his enstranged girlfriend identified as Caroline Mutinda.

It is alleged that after Mburu visited Ms Mutinda, he found her with other two men consuming alcohol in her house located at 4th Floor of Charles Mberia Flats. He immediately confronted Ms Mutinda wanting to know what the two men were doing in her apartment leading to an argument that finally ended with Mr Mburu losing his life.

According to neighbors, Mr Mutinda after being stabbed crawled outside through the stairs seeking for help but unfortunately bleed to death after collapsing near the apartments gate.

Giving a statement to the police, Caroline's neighbor, Pauline Naliaka told the police that she heard some commotion coming from the upstairs and when she went out she found a crown of people in the compound saying that someone had been killed and upon taking a closer look she found out that it was Henry Mburu. 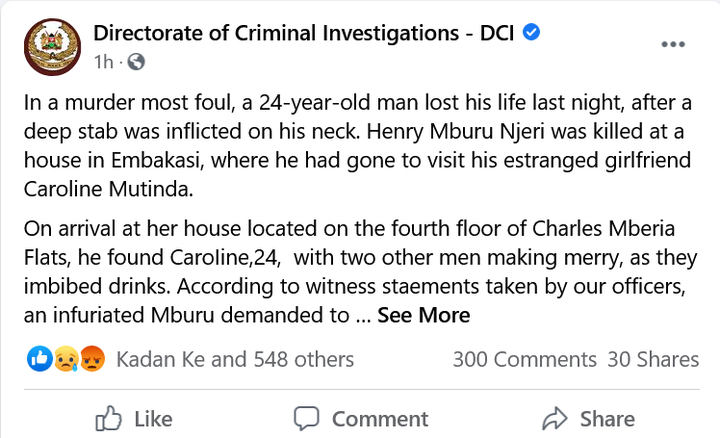 Currently, Ms. Mutinda and the two men one identified as William Nderitu and the other as Eshikimu have since been arrested and under police custody awaiting arraignment in court for murder charges.

The detectives conducting investigations are looking for the murder weapon as the are of murder as been documented as a scene of crime.

The big question that remains is that will death of Charles Mburu cool down or further fuel the heated debated on social media about the vulnerability of girl child over boy child? Will human rights come out to fight and demand justice for Charles or it will turn to be a forgotten story?

What are your thoughts as a reader?